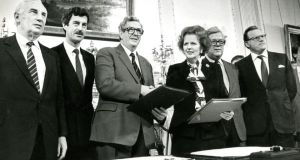 While officials and civil servants made most of the running in the construction of the Anglo-Irish Agreement, the distinctive personalities of Margaret Thatcher and Garret FitzGerald left an unmistakable mark in 1985, a watershed year in relations between the two nations.

FitzGerald made a number of emotional and highly personal appeals to Thatcher for the need for progress. While Thatcher retained her tough rhetoric, there were signs that she was softening.

1984 had not been a good year for Anglo-Irish relations. Thatcher had set the tone in a press conference following a summit with FitzGerald in November in which she had rejected, out of hand, the three main options contained in the New Ireland Forum report. Asked by her cabinet secretary, Sir Robert Armstrong, if she would like to send a personal message to FitzGerald to smooth over the difficulties this had caused, she had refused. Indeed, Armstrong’s efforts to get a dialogue going with his Irish counterpart Dermot Nally were thrown into doubt when Charles Powell, Thatcher’s private secretary, told him the prime minister was “not enamoured” of his proposals.

When Thatcher visited Dublin on December 3rd, 1984, she again refused to apologise, although she did say that she had learned that others were rather more sensitive than she was. FitzGerald replied that “after 800 years, extra sensitivity was indeed needed”. However, he took the high ground by apologising to Thatcher for his own response to her remarks, saying he had given “the worst press conference of my life”.

If FitzGerald hoped to coax out a more emollient side to Thatcher, 1985 did not begin much better. She was irritated when she learned the Irish were retreating from an earlier suggestion that they might be willing to revise articles 2 and 3 of the Constitution.

On January 2nd, Charles Powell, Thatcher’s private secretary, told cabinet secretary Sir Robert Armstrong of her view that “the Irish want more than we can give and always will” and “doubts that we shall find a way forward”.

During a meeting with her officials on February 14th, she reverted to her more hostile stance by evoking Winston Churchill. She asked the foreign office to produce a report for her detailing British shipping losses due to the refusal of the Irish government to allow the British to use Irish ports during the second World War. .

When FitzGerald met Thatcher in Brussels on March 30th, he expressed the hope that they could move on from the “static” between them. While expressing her concern that the Irish were adding “associated measures” to any putative agreement, she did praise the Irish government for passing emergency legislation in order to stop the movement of IRA funds to Swiss banks.

When they met again on the fringes of at a European meeting in Milan in June, according to the British account, FitzGerald feared that if the two governments failed to reach an agreement, Sinn Féin “would gain the upper hand amongst the minority in the North and provoke a civil war which would drag the Republic down as well”. There were people “on the sidelines” like Colonel Gadafy ready to give the IRA millions of pounds to achieve this aim.

In response, Thatcher said she shared his desire to prevent Ireland “coming under hostile and tyrannical forces”. Thatcher also expressed sympathy for the fact that FitzGerald’s political survival depended on the talks progressing. She also acknowledged it would be “very damaging” if they now collapsed. However, the Irish remained concerned Thatcher might revert to a more uncompromising position again, even as negotiations reached the final stages.

According to the British note on the meeting, FitzGerald believed that how the agreement was presented after signature was crucial, not only to the prospects of its success but to his own political future. He was literally putting his future in Thatcher’s hands.

The line she t had taken in New York awoke memories of “out, out, out” after the Chequers summit in relation to the New Ireland Forum report the previous year.

He “intended to lean over backwards at the joint press conference following the agreement to say things helpful to the Unionists”. He hoped the prime minister would be equally mindful of his political interests.

Powell claimed to be “rather astonished by this approach”’. If there was any objection to Thatcher saying that“decisions about the North will continue to be taken in London” then “we are all talking cross-purposes’. The prime minister was “a straight talker”.

On November 14th, on the eve of the signing, Thatcher’s press secretary Bernard Ingham suggested “the agreement has been so comprehensively leaked that, as usual, the central core of the event will be an anti-climax”.

He warned there was a danger of her creating the impression “that your heart isn’t in it, you have little determination to see it through”. The media would be “looking like hawks for signs of a lack of resolve”.