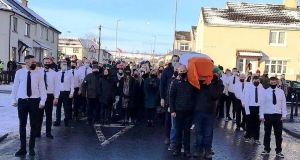 Police are investigating whether the presence of a “significant” crowd at the funeral of a former IRA member in Derry breached Covid-19 regulations.

The funeral of Eamon “Peggy” McCourt took place in the Creggan area of the city on Monday. He had contracted coronavirus, and died at the weekend.

Images emerged on social media of a crowd of people following a hearse, which was flanked by two lines of mourners wearing white shirts and black ties.

Under the coronavirus regulations currently in force in Northern Ireland, no more than 25 people are allowed to attend a funeral and there are strict limits on the number of people who are allowed to gather outdoors.

Police Service of Northern Ireland (PSNI) Chief Supt Darrin Jones said police had become aware over the weekend of a funeral on Monday “which had the potential to draw a significant number of people”.

“As a result, police engaged with representatives of the family of the deceased, the local church and local political representatives” and “emphasised the need for adherence to the current health protection regulations”, he said.

He said police were given “a number of assurances as to the conduct of the funeral, and that people would seek to pay their respects to the deceased from outside their homes rather than gather at the funeral”.

He said: “Regrettably at the funeral on Monday morning, a significant number of people gathered as part of the cortege, in a manner likely to be in breach of the health protection regulations.

“As a result, police have commenced an investigation into the matter, and where individuals are identified as potentially being in breach of the regulations, they will be reported to the Public Prosecution Service with a view to prosecution.”

Mr McCourt was a Sinn Féin activist and a former member of the IRA who was badly injured when the SAS opened fire on a car in Derry in 1981. Two other IRA members were killed.

A spokesman for Sinn Féin said the party was not involved in organising the funeral. “Eamonn McCourt’s funeral was arranged by his family,” he said. “Sinn Féin will be holding its own tribute to his memory online.”

The presence of a number of senior party figures, including the Sinn Féin leader Mary Lou McDonald and Deputy First Minister, Michelle O’Neill, at the funeral of former IRA member Bobby Storey in Belfast in June sparked a political crisis in the North last year.

A police investigation was launched after thousands lined the streets for the ceremony, which appeared to breach both social distancing guidelines and coronavirus regulations. The North’s Chief Constable, Simon Byrne, said last month he hoped the investigation would conclude “very soon”.

The DUP MLA for Foyle, Gary Middleton, said it was “hard to put into words the sheer recklessness of those involved” and these “scenes from another republican funeral will be greeted with dismay by the vast majority of the public who have abided by the letter of the law throughout Covid-19”.

“Countless people have made the difficult decision to find an alternative way to pay their respects because they know the risks associated with such public gatherings and to ensure they complied with the law,” he said.

“Within republicanism it seems that certain individuals are viewed as being more important than public health regulations.”