Taoiseach’s ‘Department of Spin’ will cost €5 million in 2018 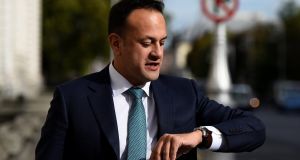 The Government has maintained its Strategic Communications Unit - dubbed as its “spin department” - will be cost neutral despite the Budget 2018 documents showing it will cost €5 million to run next year.

Opposition parties on Tuesday highlighted the conflict between the document and earlier statements by the Taoiseach on the subject. They say the unit is a “spin machine” for Mr Varadkar and Fine Gael that will be used to promote political propaganda.

Government sources denied there was a conflict, insisting that the existence of the unit would lead to better co-ordination and at least €5 million savings on the annual bill of €170 million for publicity and marketing costs across all departments and State agencies.

Fianna Fáil’s spokesman for housing Barry Cowen said the “fact that the Government is spending over €5million on its Strategic Communications Unit spin machine says a lot about their priorities”.

Pearse Doherty of Sinn Féin and Mr Cowen’s Fianna Fáíl colleague Dara Calleary separately asserted in their Dáil speeches the unit would have ongoing costs of €5 million. Mr Calleary contrasted that with the comparatively low increase in spending on the arts.

Labour TD Seán Sherlock said “the Government managed to allocate €5 million for a Strategic Communications Unit but nothing extra to support children and families with disabilities”.

The unit was set up in the Department of the Taosieach after Mr Varadkar succeeded Enda Kenny earlier this year. The Government has insisted the unit is non-partisan and will help citizens to fully understand what a government is doing, irrespective of which party is in power.

A spokesman for the Taoiseach said the unit was created because people deserved to know what their Government was doing.

“The Strategic Communications initiative will be cost neutral in 2018 by generating efficiencies across Government departments and ensuring collaboration on major campaigns,” the spokesman said.

In relation to the €5 million spend, he said it would come from within existing resources. He also said the overall budget for the Department of the Taoiseach would be 2 per cent lower next year because of lower costs associated with historical tribunals of inquiry.

The people who run the unit are both public servants. Former Fáilte Ireland executive John Concannon oversaw the Gathering initiative in 2013, the 1916 centenary commemorations and the Government’s Culture Ireland initiative.

The Sligo native has been paid at assistant secretary grade for a number of years and it is understood this will remain the case. The salary range for that position in the public service is between €122,000 and €139,000.