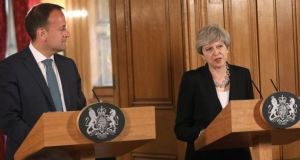 Taoiseach Leo Varadkar and British prime minister Theresa May: the Brexit loan scheme will be aimed at SMEs as they deal with the UK’s exit from the European Union in 2019. Photograph: Philip Toscano/PA Wire

Minister for Finance Paschal Donohoe unveiled a €300 million Brexit loan scheme to be available at rates of about 4 per cent for small businesses as they deal with the UK’s exit from the European Union in 2019.

The pot will be aimed at small to medium-sized enterprises (SMEs), including food companies, given their “unique exposure” to the UK, to help them with their short-term capital needs.

The scheme is supported by the European Investment Bank, the European Commission and Strategic Banking Corporation of Ireland (SBCI).

Exporters have already been hit by a fall in the value of sterling against the euro from 76.6 pence just before the UK Brexit referendum in June of last year to 89 pence currently.

The loan scheme “will give SMEs the time to put in place the necessary changes to help their businesses grow in the future,” Mr Donohoe said in the Dáil as he disclosed measures in Budget 2018.

However, Tánaiste Frances Fitzgerald subsequently told reporters that loan applications would not be taken until next March. The State, which is committing €23 million to the scheme, will begin tendering for banks to participate within weeks.

Ms Fitzgerald was unable to give details on eligibility, how many SMEs are expected to apply, or what loan limits would apply to borrowers.

Separately, Mr Donohoe allocated a further €25 million to the Department of Agriculture, Food and the Marine “to provide for the development of further Brexit-response loans for the agri-food industry”.

“As the impact of Brexit unfolds over the coming years, it is clear that there are likely to be permanent changes in our trade patterns,” he said. “ Small and medium businesses will need to innovate and increasingly look to new European and international markets other than the UK.”

The Department of Business, Enterprise and Innovation will have funds in its total €871 million budget to recruit more than 40 staff across the department and enterprise agencies “to bolster our ability to proactively respond to the challenges and opportunities arising from Brexit”.

The Minister’s budget speech made 16 separate references to Brexit.

He said that the planned establishment of a so-called rainy day fund, with an initial injection of €1.5 billion from the Ireland Strategic Investment Fund (ISIF) next year and annual exchequer contributions of €500 million from 2019, was an important step in “strengthening the national finances in a changing and risky world, especially in light of Brexit”.

“Though badged as a rainy day fund, the mentioned €1.5 billion pot was surrounded by so many Brexit references, that it appears in reality to be a Brexit mitigation fund,” said Neil Gibson, chief economist with EY Ireland.

Mr Donohoe also said that the Government’s plan to hike capital expenditure from €3.7 billion in 2015 to €7.8 billion was “central to our response to Brexit”, with investment targeted at areas such as social housing, roads and schools.

“The risk of a hard Brexit should not be underestimated,” said Michael McGrath, Fianna Fáil’s finance spokesman. “If the trading relationship between the EU and the UK resorts to WTO [World Trade Organisation] rules it will be a disaster for the economy. Goods from the agri-food sector such as beef will be most hit, as tariffs could be in the region of 40 per cent.”

Meanwhile, Davy economist Conall MacCoille said that Brexit continues to put the ongoing recovery of the Irish economy at risk, “hurting the medium-term trajectory for the public finances envisaged in the budgetary projections”. The Government expects economic growth to slow to 3.5 per cent next year from 4.3 per cent in 2017.