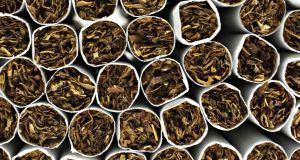 Revenue said the cigarettes represented a loss to the Exchequer of €3.6 million. File photograph: Bloomberg

Taoiseach Enda Kenny has been heavily criticised by the Opposition and anti-smoking campaigners for receiving a delegation of senior tobacco industry figures in Government Buildings, the first time any taoiseach has held formal talks with the industry.

As the Minister for Health distanced himself from the engagements with the chiefs of three major tobacco groups, Fianna Fáil leader Micheál Martin said the talks pointed to a “fundamental lack of judgment” on Mr Kenny’s part.

The Taoiseach was accompanied by Minister for Finance Michael Noonan and Minister for Justice Alan Shatter at the talks on May 7th, which The Irish Times reported yesterday on its website irishtimes.com.

While the Irish Tobacco Manufacturer’s Advisory Committee said the single agenda in the talks was to highlight the illicit tobacco trade, its own briefing material from the meeting suggests the industry chiefs want the Government to reject proposals in a draft EU tobacco directive to ban menthol and roll-your-own products.

The industry also wants rejection of measures in the draft directive on standardised and plain packaging.

Mr Martin said it beggared belief that Mr Kenny would engage in such talks. “To hold such a meeting is a tacit endorsement of big tobacco and all the damage it does. Naturally the companies were thrilled by the meeting, the advisory committee even described it as ‘very positive’.”

Mr Kenny’s spokesman said the talks were “solely and absolutely “ on the subject of smuggling. “This Government is determined to deal with smuggling in all its forms. No other matter was discussed.”

James Reilly told the Oireachtas health committee he had been invited to the talks but refused to attend. “Was I aware of this meeting? I was. Would I go to it? No I would not,” he said.

“I have declared war in the Seanad on the tobacco industry. I know of no other industry that’s legal, that if you use their product, one out of two of you will die, and that’s the reality.”

The tobacco body said the topics included a looming tax shortfall. “Tobacco receipts deliver approximately one-quarter of total excise revenues for the State (more than €1 billion), but due to smuggling and illegal selling and the deliberate avoidance of duty (by purchasing overseas), there will be a predicted shortfall in excise receipts this year of €99 million.”

Ash Ireland, the anti-smoking group, said it was surprised the Taoiseach had met the industry chiefs.