Taoiseach distances himself from united Ireland, points to co-operation as way forward 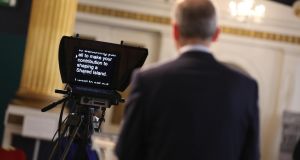 There was nothing that Micheál Martin said when unveiling the Shared Island initiative on Thursday that could have been construed as contrary to Fianna Fáil core policy.

The new unit in the Taoiseach’s own department will have a budget of €500 million to spend on long-delayed projects such as the A5 motorway to Derry, the Ulster Canal and the Narrow Water Bridge. All this plus the raft of east-west and North-South commitments signal a more active working of the Belfast Agreement.

However, the crucial question is what next? For colleagues – especially more traditional Fianna Fáil members and representatives – the commitment to a united Ireland is core to the definition of the party.

But the Taoiseach’s speech yesterday in tandem with an interview he gave to The Irish Times last month signal that, for him, increasing synergies and co-operation – while learning to share the island of Ireland with a separate sovereign entity in the North – is the end game rather than a means to an end. In his view, a united Ireland is still in there, but it’s a component rather than a priority.

Asked in the Irish Times interview whether he was a persuader for Irish unity, he replied: “Look, I’m more in the Seamus Mallon view that we learn to share this island.”

There is the prospective anomaly here of a Fianna Fáil leader who is less nationalist constitutionally than the leader and deputy leader of Fine Gael. It also does place a big ideological divide with the other republican party, Sinn Féin.

Unlike Mary Lou McDonald, Martin yesterday ruled out any Border poll within five years. He won’t say when it should occur, if ever.

There is strong support in the party for the work of the Shared Island unit. But against that there is criticism of the absence of any key aspirations beyond that.

Senior TDs such as Jim O’Callaghan, Eamon Ó Cuív and Barry Cowen have all stressed that reunification should remain at the core. Also, Cowen, has suggested there should be a Border poll by 2028, the 30th anniversary of the agreement. But does Martin’s conscious distancing of himself from a united Ireland now constitute settled policy for Fianna Fáil?