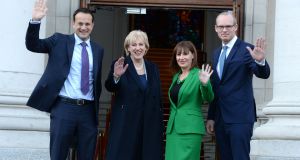 Mr Varadkar also told the Dáil Heather Humphreys will become Minister for Business, Enterprise and Innovation while Dublin Rathdown TD Josepha Madigan is the new Minister for Arts, Heritage and the Gaeltacht.

The changes follow the resignation of Ms Fitzgerald as Tánaiste and Minister for Business on Tuesday following a week of intense political pressure.

Announcing the appointments, Mr Varadkar said: “Appointing the Minister for Foreign Affairs and Trade, Simon Coveney TD, as Tánaiste will enhance his role in the Brexit negotiations currently underway and will make it easier for him to co-ordinate the work of other departments with respect of Brexit.

“In appointing Minister Humphreys to the Department of Business, Enterprise and Innovation, for the first time in seven years the Minister will be from outside the Dublin region, and also from the Border.

“This is particularly relevant in the context of Brexit and also the Government’s commitment to bring more jobs and good jobs to all regions of Ireland, especially rural Ireland. Heather’s experience as a minister and also her background in banking and finance makes her very suited to this role.

“Minister Madigan will build on the work of Minister Humphreys in the Department of Culture, Heritage and the Gaeltacht, and will drive forward the Government’s agenda for arts, culture and heritage, including the Creative Ireland programme, an ambitious ten year capital plan for the arts and multi-annual increases in funding for culture and heritage.”

Ms Madigan is a first-time TD and is chair of the Oireachtas committee on budgetary oversight.

The motion to promote Ms Madigan was challenged, but the challenge was overruled by a vote.

Ms Madigan became embroiled in controversy in 2014 when she released a newsletter which said that building Traveller accommodation on a number of sites in south Dublin would be “a waste of valuable resources” given the worth of the land.

She denied it was anti-Traveller and insisted the proposal to build in the locations selected did not make financial sense.

Labour Party leader Brendan Howlin congratulated those who were appointed, but warned a ‘“serious job of work” needed to be done.

“These appointments are necessary because of a resignation which no-one takes any joy from but which is absolutely required,” he added.

The new appointments follow the resignation of Frances Fitzgerald after days of pressure from Opposition parties including Fianna Fáil over when she first learned of the Garda’s legal strategy to attack the credibility of Garda whistleblower Sgt Maurice McCabe at the O’Higgins commission. This commission examied issues in the Garda’s Cavan-Monaghan division.

A series of emails in 2015 showed Ms Fitzgerald was made aware of the strategy by officials.

Ms Fitzgerald, who was minister for justice at the time of the emails, told the Dáil in November 2017 she only learned of the legal approach in 2016 in media reports.

Ms Fitzgerald has stated that she dealt with the matter correctly.

The Garda’s treatment of Sgt McCabe and other internal whistleblowers is under further investigation by the Charleton tribunal.

Hospitality industry suffers another blow as New Year’s Eve festival is cancelled 12:53
Luggala estate reopens to walkers for first time since March 12:08
Housing should only be built with ‘concrete certainty’ about location of public transport 11:57
Man charged and remanded in custody over €40,000 drugs seizure by gardaí in Cork 10:57
Man in his 30s dies in single vehicle crash in Wexford 10:36