Taking a closer look at how the super rich make it

Column: The vast fortunes of the 10 wealthiest people in the world allow them enormous power over much of humanity 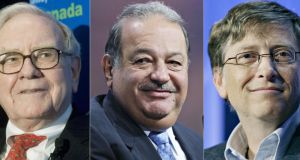 Forbes magazine published a special edition in March with the cover headline: “Billionaires: the names, the numbers and the stories behind the 1,426 people who control the world.”

In an introductory comment piece, editor-in-chief Steve Forbes wrote: “The overwhelming majority of these people have moved ahead through meeting the needs and wants of other people, not through inheritances or crony capitalism. Their successes didn’t come at the expense of everyone else.”

The magazine reports that the 1,426 billionaires have a net worth of $5.4 trillion ($5,400 billion), up from $4.6 trillion the previous year. The GDP of Germany is $3.6 trillion, of France $2.7 trillion, of the UK $2.4 trillion and of the Republic €0.2 trillion. The 10 wealthiest people in the world, according to Forbes , are: Carlos Slim of Mexico; Bill Gates of the US; Amancio Ortega of Spain; Warren Buffett of the US; Larry Ellison of the US; Charles and David Koch of the US; Li Ka-shing of Hong Kong; Liliane Bettencourt of France; and Bernard Arnault of France.


Unequal society
For anybody to be able to amass a fortune of $73 billion, as Carlos Slim has done in Mexico, requires a social system that rewards an elite spectacularly, inevitably to the detriment of the mass of the people. And so it is in Mexico. Almost incredibly, 44.2 per cent of the Mexican population (more than 49 million people) live below the poverty line as defined by the country’s national council of social development policy. Of the 30 most developed countries in the world, Mexico is the most unequal, according to the Organisation for Economic Co-operation and Development in a 2008 report.

Carlos Slim has made most of his fortune in the mobile phone business and via investments. It is hard to perceive what unique contribution he has made to the happiness of humanity to account for his $73 billion fortune.

Microsoft founder Bill Gates certainly made some contribution to the welfare of humanity, but his fortune ($67 billion), in the main, has come about not from any extraordinary inventiveness on his part but from wise investment decisions which piggybacked on the effectiveness of others.

Amancio Ortega is the founder of Zara and part of his fortune ($57 billion) has come at the expense of some of the poorest people in the world in Asian sweatshops. Warren Buffett’s fortune ($53.5 billion) has come largely from stock market gambling. He, like many of the other billionaires, has engaged in philanthropy (good for public relations and softening the appearance of the vulgar injustice of such vast wealth), but it is difficult to see what contribution he has made to human happiness to justify that fortune.

Like Gates, Larry Ellison also made his fortune ($43 billion) in computers and was an inventor originally – he devised a database for the CIA in the 1970s which he named “Oracle”. But for the most part he has made his money also from investments, takeovers and mergers.

Brothers Charles and David Koch have made fortunes ($34 billion each) from investments; the latter has made a large part of his wealth from the manufacture of toilet rolls. They are both libertarians and spent millions trying to prevent the election of Barack Obama as US president, to obstruct his redistributive instinct – they need not have worried.

Li Ka-shing, originally from Chaozhou in China, made his fortune ($31 billion) initially from manufacturing plastic flowers. His empire now includes banking, construction, real estate, mobile phones, satellite TV, hotels, airports, electric power, ports and shipping. He is the only one of the 10 wealthiest people who came from humble beginnings – the others had privileged backgrounds.


Most powerful people
So what is it about these 10 wealthiest people in the world – or indeed the 1,426 wealthiest people – which explains their vast wealth? Their vast wealth, bear in mind, allows them not just lavish lifestyles but enormous power over so much of the rest of humanity. They are indeed, as Forbes magazine trumpeted, the most powerful people in the world.

The combined wealth of Ireland’s richest 250 people is €49.83 billion. This is according to the Sunday Times rich list survey published on April 21st. As with the 1,426 wealthiest people in the world, these 250 wealthiest people in Ireland managed to defy the prevailing depression by increasing their wealth from €46.7 billion in 2012. A fraction of this wealth would greatly relieve pressures on the State’s financial resources but, apparently, using it for this is not an option.

For the reality is that, as in Mexico, our social system is geared to enable vast wealth to be accumulated by an elite few at the expense of the many. And any challenge to the absurdity of such a system is deemed dangerous or impractical or illusory or just plain out of the question.