O’Dea defends decision to vote no 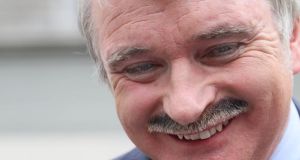 Willie O’Dea: “I think the Government has a duty to legislate but the legislation should be as watertight as possible. I am not satisfied that has happened and that is why I voted against the Bill.” Photograph: Nick Bradshaw

Fianna Fáil TDs were yesterday digesting the implications of two-thirds of them voting in opposition to party leader Micheál Martin on the Protection of Life During Pregnancy Bill.

The scale of the rejection of their leader’s position has been obscured by the revolt of a number of Fine Gael TDs but it was a surprise that 13 of his 18 TDs went against the Fianna Fáil leader.

That created confusion at the committee stage of the Bill yesterday when the party’s health spokesman, Billy Kelleher, who supports the Bill, put down amendments on behalf of colleagues who oppose it. The arguments for those amendments were then made by TDs such as Éamon Ó Cuív.

One big difference in the respective positions of Enda Kenny and Micheál Martin is that Fianna Fáil allowed a free vote. That happened because the parliamentary party was so divided on the issue that Mr Martin would have inevitably lost a number of TDs if a whip was imposed.

“It is clearly an issue of conscience for some of our TDs like Éamon Ó Cuív, Seán Ó Fearghaíl, Seamus Kirk and John Browne, who have been clear all along that they could not support the Bill,” said one senior party figure.

He conceded that the total number of those voting against was higher than expected and suggested that political calculation must have played a part in the decisions of some others.

‘Fragile state’
“Micheál agreed to a free vote for the simple reason that some TDs would have left the party if the whip had been applied and in our fragile state we couldn’t afford that. The problem is that once a free vote was allowed the numbers tempted to vote against the Bill increased and we ended up with the majority taking the contrary position.”

Limerick city TD Willie O’Dea, one of those expected to support the Bill who voted against on second stage, strongly denied yesterday that he had changed his position for political advantage.

“I said some time ago I would support the principle of the legislation but I was clear that it would have to be watertight. I think the Government has a duty to legislate but the legislation should be as watertight as possible. I am not satisfied that has happened and that is why I voted against the Bill,” he said.

Mr O’Dea said it was a mistake not to have a review clause which would establish if the legislation was being implemented in the restrictive manner promised by Minister for Health James Reilly.

“If a proper review clause was included in the Bill I would reconsider my position when it comes to the vote on the report and final stages next week,” he added.

Mr O’Dea denied that the numbers voting against the Bill had damaged the authority of the party leader. “I am one of Micheál Martin’s strongest supporters and it would be very wrong to read the vote against the Bill as reflecting on his leadership,” said Mr O’Dea.

He also made the point that the abortion issue is not a big talking point among voters.

“I do a lot of work on the ground and the issue is not coming up. On the doorsteps people want to talk to me about medical cards, social welfare entitlements, the difficulties they have paying their mortgage or the increasing burden of taxation. Only a handful of people have raised the abortion issue on the doorstep.”

Political advantage
TDs on both sides of the argument agree that the issue is not being raised with them by many voters. However, some believe that political advantage is still a consideration when it comes to taking sides on the issue.

“When you look at this coldly only a small percentage of voters are really exercised about the subject but those who are have very strong views and are not likely to forget how you voted while the majority who don’t have strong opinions will not remember one way or another,” said one TD.

Whether the majority view will damage Fianna Fáil or whether it may gain by being on both sides of the argument only time will tell.