Stuttering start as Coalition parties prepare to do battle

Disorganised dissolution of Dáil leaves much room for improvement

An Taoiseach Enda Kenny releases a video asking for public support as he confirms a general election. 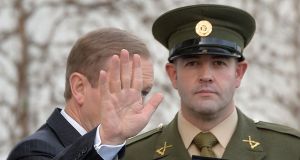 For something so long in the planning, the 2016 general election campaign got off to a decidedly stuttering start for the Coalition parties.

In the blue corner, we had the disorganised announcement of the dissolution of the Dáil and a halting press conference performance from Taoiseach Enda Kenny.

In the red corner, we had Tánaiste Joan Burton in a position where she looked every inch the junior government partner as she sent Kenny off to Áras an Uachtaráin, when she was just shy of taking out a handkerchief to wave the Taoiseach out of Government Buildings.

Neither could the Tánaiste decline throwing a dig at her deputy leader Alan Kelly as the pair launched the Labour Party campaign in Dublin city centre.

In a typically bombastic weekend interview, Kelly had insisted he was his own boss, prompting the question of Burton whether she was in fact the Tipperary deputy’s superior.

The Tánaiste insisted Kelly, who was standing beside her, was an “obedient employee”. The pair clearly have an uneasy relationship but need to keep it in check over the next three weeks if the Labour campaign is to maintain coherence. Brendan Howlin cannot step in and be referee when the party’s future is in the hands of voters.

For Fine Gael, there were also missteps. The morning Dáil announcement saw Kenny deliver a short statement before leading his ministers from the chamber as the Opposition sat wondering what was going on.

It is of course correct that he did not have to inform the Dáil at all and that Fianna Fáil has little grounds for complaints, given Bertie Ahern’s midnight flit in 2002 – when he informed an empty chamber late at night that it had passed its sell-by date – and his decision in 2007 to inform the Sunday Independent before he told the nation.

Yet Fine Gael seeks to present itself as a break from those times. Would it have cost Kenny a dime to make a brief statement, and afford the Opposition a chance to respond, as Brian Cowen did in 2011?

The Taoiseach would have looked statesmanlike. Instead, what occurred looked disrespectful and confused.

Apparently there were conflicting views within Fine Gael about whether Kenny should have told the Dáil at all. If that was the case, it certainly showed.

Such trivia will be quickly forgotten, however. On a more serious note, Kenny stumbled over economic questions at Fine Gael’s opening press conference of the campaign and had to hand over to Minister for Finance Michael Noonan – a reminder of the Taoiseach’s shortcomings that he has worked hard to shake.

Kenny was asked about Noonan’s stated position that the €12 billion in resources available to the next government would be split between 30 per cent tax cuts and a 70 per cent increase in public spending, while also committing 25 per cent to a so-called “rainy day”, or contingency fund.

The Taoiseach largely obfuscated about how the vast majority of people do not understand “economic jargon” and said all details would be spelled out in Fine Gael’s long term economic plan, to be published on Thursday.

Noonan stepped in and effectively said the contingency fund will come from within the 70 per cent identified for public spending.

Party sources afterwards said they were happy with Kenny’s messaging – that he had stuck to his key points. Yet there is more to politics than messaging.

Questions about the so-called “fiscal space” have been hanging around for weeks, and it can be argued that the Taoiseach should have been better prepared.

For Fine Gael and Labour, there is room to improve following the first day of campaigning.