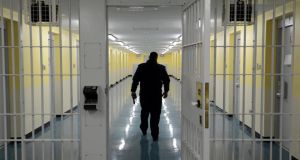 Minister for Justice Frances Fitzgerald has said the allocation of stab vests to prison officers is being kept under review.

Ms Fitzgerald said 160 stab vests had been produced to date.

Her comments follow the stabbing to death of a 41-year-old prisoner in Cork Prison last Saturday.

The incident followed on from an attack by a Mountjoy prisoner that left two prison officers in hospital last month.

“My first thought is obviously with the family of the deceased . . . he’s lost his life as a result of this violent incident. No level of violence obviously can be tolerated in our prison system,” she said.

“We work all the time to make sure that what happens in our prisons ensures the safety of our prison officers and prisoners. This type of incident is rare but we want to prevent anything like this happening insofar as we absolutely can.”

The Prison Officers Association said recently that knife attacks by inmates on its members have increased to critical levels.

Ms Fitzgerald said her department was working very closely with the Prison Officers Association to ensure that prison officers have stab vests when they need them and they were deemed to be necessary.

“Of course you can’t eliminate risk completely in the prison service and it’s inherently a service that’s dealing with people where there are high levels of violence,” she said.

“But we’ve already produced approximately 160 stab vests for prison officers and that will be kept under review.”

Ms Fitzgerald said she wanted to ensure prison officers were as safe as they possibly could be, and that that was the aim of prison management as well.