Squeezed Middle: ‘Fine Gael would be toxic to all teachers’

Meet the Voters: Stephen Donnelly makes sense but 'Lucinda Creighton’s tax policy is for the birds' 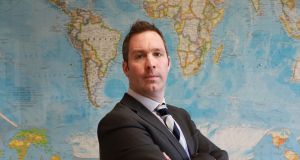 Enda Whelton:‘My fear is that if Labour go back in with Fine Gael, it will be a Fine Gael-led education policy. That would be a disaster.’ Photograph: Nick Bradshaw/The Irish Times

Enda Whelton is part of the ‘squeezed middle’. He is a teacher who lives in Portlaoise but commutes 1,000kms to work in Blackrock, Co Dublin while his family lives in Co Clare. Read Enda’s profile here

Labour, Fine Gael and Fianna Fáil have these debates practiced to the hilt; every word coming out of their mouths has been 100 per cent prepared. There’s nothing natural about their performances. That doesn’t engage me as a voter.

I thought Stephen Donnelly made the most sense. He hammered home the point that everyone else is going on a spending spree with big cuts to the USC. That attracts a lot of voters, but not me. I would prefer to see the USC stay; if I have to pay more tax in return for better public services, I’m ok with that. They need to tell people that if they want a better public health system, it has to be paid for.

Lucinda Creighton’s tax policy is for the birds. She wants an American tax system with European social services. I don’t know where she thinks the money is going to come from. Sinn Féin’s financial plans don’t make much sense to me either.

There was very little about education in the debates, which was disappointing, but it is obviously not a priority compared to other issues. Some of the manifestos are stronger on education than others.

Fianna Fáil want to increase teaching hours, which won’t be popular with teachers, as we are already well above the OECD average with 22 contact hours per week. People Before Profit want to reduce teaching hours to 18 per week, which I think would be a good thing.

Fine Gael would be toxic to all teachers. They pay lip service to equal opportunities but they are following policies that would do the exact opposite. They have a concept of “no child left behind” in their manifesto, the exact same name as George Bush Jr’s education policy when he came to power, which was a disaster. They also want to give funding to schools based on results each year, which will encourage a “teaching towards the test” approach.

Labour announced that within 100 days of getting back into power, they would hold a national convention on education. I thought this would be a very good idea. This has made me look back towards Labour, but I genuinely haven’t made up my mind yet. I’m still looking at independents. My fear is that if Labour go back in with Fine Gael, it will be a Fine Gael-led education policy. That would be a disaster.

Over the next week, I want Labour to outline what this convention would involve in more detail, and commit to involving teachers more in curricular reform.

The election was called so late, it feels like the campaign is only gathering momentum now. In the media it is well underway, but door-to-door campaigning seems to be only starting.

Enda Whelton was in conversation with Ciara Kenny as part of The Irish Times Meet the Voters series, profiling 10 sample voters in a bid to track the impact of the 2016 General Election campaign on their voting intentions. Follow them at irishtimes.com/election-2016/meet-the-voters