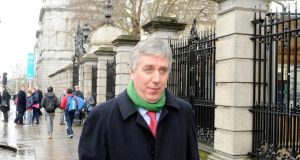 John Delaney of the FAI leaving the Dáil today after appearing before a committee looking at the effects of a possible ban on sponsorship of sporting events by alcohol suppliers. Photograph: Dave Meehan

Ireland's three main sports organisations are all opposed to a ban on alcohol sponsorship for major sporting events, an Oireachtas Committee has been told.

The heads of the Gaelic Athletic Association, the Irish Rugby Football Union and the Football Association of Ireland told the all-party Committee on Transport and Communication this morning that there was no evidence that it had a positive effect on reducing alcohol misuse in society.

Páraic Duffy of the GAA, Philip Browne of the IRFU and John Delaney appeared before the committee to respond to proposals being considered by Minister of State for Health Alex White to prevent alcohol companies being allowed to sponsor major sporting events.

Mmbers of the committee, chaired by Fine Gael TD Tom Hayes, said they would require the overall figure of how much alcohol sponsorship was worth to the sports organisations to allow them fully consider the issue.

Because of commercial sensitivities that information was only partially available today. Mr Browne said that alcohol related sponsorship was worth a total of € 9 million to the IRFU while Mr Delaney said it was worth a significant portion of the FAI’s overall sponsorship revenue of € 6m. Mr Duffy said alcohol sponsorship was a small amount of the GAA's overall revenue.

There were mixed responses from members of the committee with most indicating they did not support an outright ban.

Labour TD Eamon Maloney said he fully supported a ban while his colleague Ann Phelan pointed out the paradox of sports organisations promoting anti-alcohol measures while still relying on alcohol sponsorship for revenue.

"Alcohol is the national drug. We have a difficulty saying it and owning up to it,” Mr Maloney said.

In his submission to the committee, Mr Duffy said the GAA accepted "that there are issues around the misuse of alcohol, particularly by young people. And that these issues must be addressed."

"We believe that there is any hard evidence to demonstrate that a ban on sports sponsorship will have any impact in terms of reducing the misuse of alcohol,” he said.

He described the national and ambitious alcohol and substance abuse prevention programme in operation within the GAA since 2006, which employs three people full-time and is operated in conjunction with the HSE.

"It is an approach based around education and it uses a settings-based educational and intervention programme."

He also described other initiatives within the organisation including 'Off the Booze and Off the Ball' which encourages members to abstain from alcohol for a month.

"We believe that the support of government in that policy will be far more effective than the imposition of any ban on alcohol sponsorship in sport. "

Similarly Mr Browne said the IRFU has also made submissions to the HSE in relation to a similar education and prevention programme.

Setting out his key argument, he said: "In countries where such bans have been introduced no empirical evidence whatsoever exists that demonstrates a ban on sports sponsorship is effective in terms of reducing alcohol misuse."

He said sponsorship was not concerned with increasing the sales of beer but about companies protecting market share. Mr Browne said that sales of beer in Ireland have fallen by 15 per cent in recent years.

France was the only country where a ban was introduced in 1991 and it could not be shown it had any impact over the long term, he said. In terms of revenue he pointed out that State funding for rugby in France was very substantial and the market for other rights, such as TV rights, was many multiples of the market in Ireland.

He said the loss of sponsorship would reduce revenue and diminish the IRFU's ability to attract major competitions or events to Ireland. "There is no sponsorship white knight waiting to fill the financial chasm that will be left in every sport," he said.

Mr Delaney pointed to initiatives the FAI had taken including night games in Dublin suburbs such as Ballymun and Tallaght that had reduced the incidence of anti-social behaviour.

"The games take place during prime anti-social hours where young people would cite boredom as a reason for drinking and smoking."

Mr Delaney said the loss of alcohol sponsorship would be devastating for the finances of the FAI.

Fine Gael TD John O'Mahony, a former Galway and Mayo GAA manager said that many small clubs would not survive without the sponsorship of local pubs and hotels. His colleague Patrick O'Donovan said it would be ludicrous to have a situation where a pub hosting an event and providing sandwiches would be seen as breaking he ban.

Mr Maloney said that he as in total support of the ban. He said alcohol abuse in Ireland cost €3.4 billion each year.

Independent TD Luke Ming Flanagan said it was unhealthy for an eight year old boy to go around with jersey with an alcohol logo.