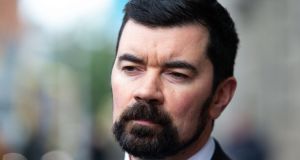 This is the third election victory in less than a year for Skerries-based politician Joe O’Brien (42).

Elected to Fingal County Countil in last May’s local election, in November he was elected to the Dáil in the by-election following Independent TD Clare Daly’s election to the European Parliament.

Viewed as calm, reserved, hard-working and thorough, one colleague described him as “not a man to pick up a megaphone to deal with a challenge”.

Originally from Co Cork he is a University Collgee Cork graduate of French and economics and worked for the Youthreach programme for early school leavers, before moving to Dublin to study for a master’s degree.

Married with three children, he worked for the Immigrant Council of Ireland for three years before his Dáil election and previously worked for more than a decade at Crosscare, the social-care agency of the Dublin Catholic archdiocese and one of the biggest providers of services to the homeless in Dublin city.