Six decades of shamrock in the White House

How a piece of diplomatic bridge-building became an annual fixture 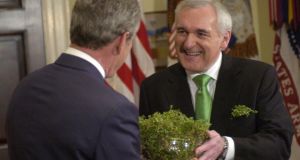 Bertie Ahern, then taoiseach, gives then US president George W Bush a bowl of shamrock during a White House ceremony on St Patrick’s Day in 2006. Photograph Leslie E Kossoff/LK Photos

It’s easy to take for granted the extraordinary access Ireland will have to the White House today when Enda Kenny hands over a ceremonial bowl of shamrock to Barrack Obama.

It isn’t just a soft-focus photo opportunity. As well as a bilateral meeting at the Oval Office, there’s the speakers’ lunch on Capitol Hill, a lavish evening reception at the White House, not to mention other one-to-ones with high-ranking officials.

All in all it’s a large chunk out of the diary of the most powerful man in the world. And all this for one of the smallest countries in Europe which isn’t even a military ally of the US.

None of this happened by accident. The story of how Ireland forged such close political links with the most powerful country in the world started out as a piece of hard-headed bridge-building in 1952.

At the time Irish-American relations were not at their cosiest following the Free State’s decision to remain neutral in the face of the Nazi threat in Europe, according to Dr Michael Kennedy, an expert on Irish foreign policy documents at the Royal Irish Academy.

While the multi-party government of 1948 to ’51 had lofty notions of Ireland being an influential honest broker in world affairs, it quickly found out that it did not have all that many friends in high places.

On St Patrick’s Day in 1952, John Hearne, the Irish ambassador in Washington, dropped a small box of shamrock and a goodwill message into the White House for President Harry Truman. The president was away at the time, but sent a message expressing hope that good relations between the countries would develop over the coming generations.

Bearing gifts
From this point on the Irish came bearing gifts every year. They started out as low-key events, usually involving ambassadors. The first time a taoiseach presented shamrock was in 1956 – John A Costello – while the then president Seán T O’Kelly headed up the diplomatic team three years later.

From the US point of view, the shamrock ceremonies had their own political capital. US president Dwight Eisenhower was more than happy to pose for a photograph as O’Kelly pinned shamrock on his lapel; it allowed him to highlight his Irish roots in a country where about 40 million Americans claim Irish ancestry.

John F Kennedy’s election provided the platform to cement an even stronger US-Irish relationship. This time veteran diplomat Thomas Kiernan, the Irish ambassador to the US, went all out. The shamrock was sourced from Wexford, close to Mr Kennedy’s ancestral home. It was placed in a specially-designed Waterford Crystal bowl with an engraving of the White House.

The real greening of the White House came with the election of Bill Clinton. Here was a president with a real appetite and interest in playing the role as peacemaker. His warm handshake with Gerry Adams, the head of Sinn Féin, at a time when the IRA had yet to decommission any arms stole the spotlight in 1995. Access didn’t come cheap: Adams reportedly agreed to place decommissioning on the agenda of any talks with the British, which helped pave the way for peace.

Trade links
Today’s shamrock ceremony is likely to have a heavy economic agenda, with moves to create ever-closer trade links between the US and Europe taking up much of the discussion. There is also the issue of corporation tax, immigration reform and foreign direct investment.

Whatever comes out of today’s meeting one thing seems certain: what started out as a piece of bridge-building just over 60 years ago is a permanent and prominent fixture in the White House diary.

1 Inside the O’Brien Fine Foods factory in lockdown Kildare
2 ‘It was pitch black’ - Rescued teenager describes night afloat with her cousin in Galway Bay
3 A million trees, including 400,000 oaks, to be destroyed this week
4 Cousins went paddle boarding at Furbo as usual location was cut off due to Covid-19
5 Covid-19: Almost 50,000 more people waiting for outpatient appointment since start of year
Real news has value SUBSCRIBE