List of 15,000 donations reveals fundraising unmatched by any other Irish party

Sinn Féin has raised $12 million (€10.7 million) from some of America's biggest construction companies as well as trade unions, Hollywood stars and small donors in a 20-year fundraising effort across the United States.

The 15,000 donations received by Friends of Sinn Féin, the party's US fundraising arm, between 1995 and 2014 are the fruits of a fundraising effort unmatched by any other Irish political party in the US in modern times.

Philanthropist Chuck Feeney emerges as the biggest donor. Personally and through two of his companies, he donated $780,000 (€700,000), which funded the establishment of a Friends of Sinn Féin office in Washington DC and the running of the office for three years. 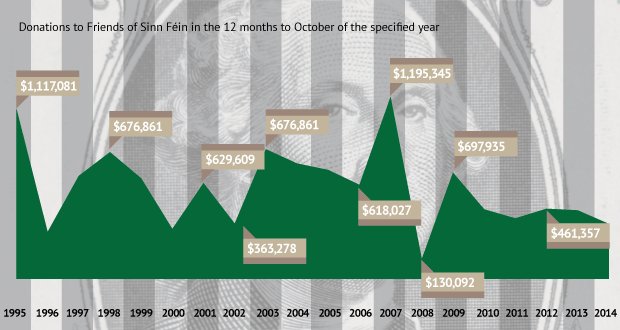 Trade unions donated more than $1 million, with the largest sum of over $220,000 coming from the Laborers’ International Union of North America.

The analysis of 20 years of Friends of Sinn Féin returns at the US Department of Justice shows a sophisticated fundraising operation, developed over years, that taps established donors and benefits from random donations from across the US.

New York construction companies associated with Irish-American families, including some major corporations in the industry such as Structure Tone and Henegan Construction, are among the biggest donors to the party’s US fundraising arm.

Almost $9.4 million of the $12 million donated were sums of $1,000 or more from individuals and companies ranging from plumbing firms to restaurants, from IT service providers to funeral homes, from air conditioning firms to fish suppliers.

The most lucrative fundraising periods for the party came between February and June 1995, a time of marked progress in the Northern Irish Peace Process after Sinn Féin president Gerry Adams visited the US following the 1994 IRA ceasefire. Friends of Sinn Féin raised almost $900,000 in that period. The party's biannual fundraising spoils have dropped since then but still remain healthy: in the 12 months to the end of October 2014, the party raised $361,242.

A Friends of Sinn Féin dinner held last November at the Times Square Sheraton Hotel in Manhattan, the party’s biggest annual bash, will raise an estimated $350,000.

Friends of Sinn Féin in effect took over the fundraising channels established by Noraid, the US fundraising group that raised at least $3.5 million for republicans and the families of IRA prisoners between 1971 and 1990.

In an interview with The Irish Times, James Cullen, president of Friends of Sinn Féin, said that following the 1994 ceasefire the party recognised the need to change its fundraising so “it could no longer be just some very well-meaning people passing the hat in a Bronx bar”.

Friends of Sinn Féin, set up in late 1994, had to be “completely transparent,” he said. All donations raised are reported to the US Department of Justice under a 1938 law requiring full compliance as an agent of a foreign political party.

“There is a three-member board, of which I am chairman, that ensures that we imitate Caesar’s wife: we want to be sure that we are above reproach,” he said.

Complying with electoral rules in the Republic, Mr Cullen said he ensures that all money raised goes only to Northern Ireland where it is used to pay for the cost of running the party’s offices and items such as mobile phones, computers and used cars to transport party workers.

“I actually pay the bill, so I make the cheque to Joe’s Used Auto Lot or to Fred’s Printing Company in Derry,” he said, using hypothetical examples of the kind of suppliers he pays. “That’s how I make sure.”

The four main “touchstones” for Friends of Sinn Féin were, he said, the construction industry, labour unions, the hospitality trade and individuals who “send in a cheque every month” and others who “out of the blue” send in $1,000.

Cheques have come from Maine in the north east to Arizona in the south west to as far afield as Guam, the US territorial island in the western Pacific Ocean.

New York, with its strong Irish-American community, accounted for the largest contribution by far; almost $6.3 million was raised from the state followed by neighbouring New Jersey with $1 million and California with $613,804.

Based on population sizes, Washington DC had the highest number of donations with $394 per head of population, owing to the large number political groups and trade unions based in the US capital, followed by New York at $318 a head.

In certain filing periods, totals of donations tallied by The Irish Times did not correlate with the figure reported by Friends of Sinn Féin.

Mr Cullen said revenue from non-donation sources, for example bank interest and credit card rebates were included in the total amount reported but were not listed as donations as this income is “not derived from fundraising”.

“Nevertheless, in an excess of caution, we report that miscellaneous, non-fundraising revenue as well,” Mr Cullen said.

Labour makes formal complaint to Dáil ethics watchdog about Fine Gael TD Damien English
Ireland’s migration politics: ‘It feels as if we’re scrambling and other people are setting the agenda’
Sunak may not be strong enough to force through a deal on protocol
Hoteliers declining to host refugees due to fear of protests and local opposition
Fintan O’Toole: Ireland still lacking the sense of shared space needed for unity to become a reality

Deportation of failed asylum applicants to be ‘accelerated’, says Harris
Irish director’s all-male Beckett play cancelled as only men could audition
‘I had been addicted for eight years and didn’t realise the depth of it until one day I couldn’t stop shaking’
The things I’ve learned about living from dying
Wales v Ireland player ratings: Keenan, Sheehan and Doris lead the way in Cardiff

US shoots down Chinese balloon over Atlantic Ocean