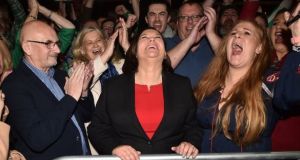 Sinn Féin leader Mary Lou McDonald celebrates with her supporters after being elected at the RDS Count centre. The party spent €15,725 from February 2nd to election day on February 8th on Facebook ads. Photograph: Charles McQuillan/Getty

Fine Gael and Fianna Fáil spent more, while Sinn Féin spent less but spent it better – this was the view of social media analysts on which parties used the platforms best in the election campaign.

In the last week of the campaign up to poll day, Sinn Féin spent half of what Fianna Fáil spent on adverts on Facebook and Instagram, and a quarter of what Fine Gael spent in that time.

Where Fianna Fáil and Fine Gael took a blanket approach to social media ads, Sinn Féin was more targeted with a county-by-county approach, tailoring messages to particular candidates and to different approaches in individual constituencies. It focused on younger age groups who spend the most time on social media, particularly the 25-34 age bracket.

“They spent less money on far more advertising. Essentially, they spent much less per ad, they ran far more ads and their ads were much more targeted,” said Stephen O’Leary, managing director of Olytico, a company that analyses social media.

Twitter, which banned political ads, showed that the party and its president Mary Lou McDonald were the most-talked about political party and leader on polling day at a time when tweet volumes on the election were 43 per cent higher than four years ago.

Data from CrowdTangle, with monitors interactions on social media pages, found that Sinn Féin dominated social media discussions; they had 60 per cent of the share of conversations on Facebook, compared with less than 10 per cent each for Fine Gael and Fianna Fáil.

“I believe we did it better,” said newly elected Sinn Féin TD Ruairí Ó Murchú, the 41-year-old who managed to retain Gerry Adams’s seat in Louth.

Mr Ó Murchú said that the party’s candidates went through a checklist with Sinn Féin’s head office to make sure candidates were “doing the important bits and getting that right” on social media.

Mr O’Leary, citing “the good, the bad and the ugly” of social media during the campaign, referred to the video Labour’s Aodhán Ó Ríordáin produced poking fun at the pronunciation of his name as a good example of “smart, snappy video content” that generated a positive reaction.

The video raised the profile of the Dublin North-Central candidate and had almost 110,000 views on Twitter and 41,000 on Facebook, helping him win back the Dáil seat he lost in 2016.

The bad, said Mr O’Leary, was Fine Gael’s video ridiculing Fianna Fáil TDs running around Dublin “looking for policies” to the Benny Hill theme music. The video was viewed more than 120,000 times before Fine Gael was forced to remove it over the backlash to the negative ad.

“There was no getting away from the fact that it was poorly produced and set the wrong tone of voice,” he said.

The ugly was Fine Gael’s “no, no, no” video aimed at dispelling any notion among voters that the party would enter coalition government with Sinn Féin but which backfired badly as the party’s opponents used it against Fine Gael.

“It is hard to fathom how that wasn’t anticipated,” said Mr O’Leary.

One Fine Gael ad posted on Facebook in the last days of the campaign questioned whether people would be getting a coalition government with Sinn Féin if they voted Fianna Fáil.

The ad featured a black and white photo of Fianna Fáil leader Michéal Martin looking ominous against a dark backdrop with Ms McDonald at his left ear along with the text: “Vote Fianna Fáil, Get Sinn Féin?”

“I am not sure that worked,” said Liz Carolan, who campaigns for transparency on social media.

Where the two big parties went negative, Sinn Féin in the latter stages focused on get-out-the-vote ads that focused on educating the electorate about how to vote and how transfers worked.

“All of the evidence would suggest that they understood the medium far better than Fianna Fáil and Fine Gael.”