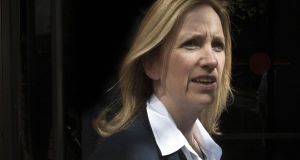 One of the best performers from the far-right milieu was Gemma O’Doherty who took 1.97 per cent of the vote in Fingal. Photograph: Brenda Fitzsimons

If the surge in support for Sinn Féin and parties leaning to the left was a noteworthy trend in this general election, the total failure of far-right or anti-immigration candidates to capture any respectable portion of the vote was another.

The success of anti-immigrant movements across Europe and recent protests over direct provision in towns around Ireland prompted some 30 candidates from several groups to compete on a far-right platform.

These candidates, who often describe themselves as “Irish patriots”, are united by strong anti-immigrant rhetoric. They frequently cross-promoted each other during the campaign.

Without exception they were heavily defeated, with no candidate even polling well enough to get their expenses back.

The National Party, which was established in 2016, is among the most extreme of these groups. Its leader, Justin Barrett, has attended European fascist and neo-Nazi events in the past in his role as an anti-abortion campaigner and has stated that doctors who perform abortions should receive the death penalty.

Barrett himself did not run, but nine other National Party candidates did including deputy leader James Reynolds. He was the party’s best performer, getting 1.74 per cent of the vote in Longford-Westmeath.

The Irish Freedom Party, founded in 2018, ran 10 candidates, with none getting more than 2.06 per cent of the vote. Its candidate in Kerry, John Bowler, a Californian who moved to Ireland in recent years, received just 0.61 per cent of the vote, while in Dublin Bay-North veteran lay litigant Ben Gilroy got 1.08 per cent.

One of the best performers from the far-right milieu was Gemma O’Doherty, a former Irish Independent journalist turned conspiracy theorist and anti-immigration campaigner. She took 1.97 per cent of the vote in Fingal (or 1,614 votes after transfers).

O’Doherty made headlines recently for targeting a mixed-race couple on social media after they featured in a supermarket advertisement. She has also been criticised for publicly sharing photos of dark-skinned schoolchildren that she claimed showed Irish people were becoming an “ethnic minority in many towns”.

This is the third election she has contested, having previously run unsuccessfully for a European seat and in the Fingal byelection last November. She also attempted to get on the 2018 presidential ticket but could not secure enough nominations.

O’Doherty, who has been banned from YouTube and Facebook, ran under the banner of Anti-Corruption Ireland, an unregistered political party. Her party colleague John Waters did even worse. The author and former Irish Times columnist got 925 votes in Dún Laoghaire before being eliminated on the first count.

The results for most other candidates who have expressed anti-immigration or far-right views were similarly dismal.

Renua, which has increasingly espoused anti-immigrant rhetoric in recent years , did significantly worse than in 2016 and again failed to return any candidates.

Businessman Peter Casey, who earned 23 per cent in the 2018 presidential election and has described immigration as a “ticking time bomb”, finished third-last in both Donegal and Dublin West.

There were contrasting signals about how the far-right would perform in the run-up to the election. An ESRI survey reported in 2018 that 41 per cent of Irish people were open to accepting more immigration by Muslims. But in the Ipsos MRBI exit poll for The Irish Times/RTÉ/TG4/UCD on Saturday, just 1 per cent of respondents cited immigration as a main voting concern.

Dr Natasha Dromey, an extremism expert at University College Cork, said it would be dangerous to assume Ireland to be immune from a lurch to the far-right. “However, for now at least Ireland is not likely to be impacted too much by this in the large-scale political sense.”

Some who have made controversial comments on immigration in the not so recent past did succeed. Independent TD Noel Grealish, who last year described African immigrants as “spongers”, was re-elected in Galway West.

Verona Murphy, who previously linked migrants to terrorist group Islamic State, took a seat in Wexford for the first time as an Independent candidate.

“We have to ensure we don’t go down the road of populism like some European countries,” said Labour leader Brendan Howlin, who was also elected in Wexford. “I think there is a responsibility on political parties to ensure that prevails within their own outfits because otherwise there will be a temptation for people to test the waters in a way that will be very divisive.”

Dr Dromey believes that, while there has been an increase in far-right talking points in politics and society, “far -right parties have not established themselves as any real alternative to the system, and their narrative offers little in terms of fixing the problems that the general public see as being the most significant.”

Meanwhile, some of those hard-right candidates have not been taking their defeat in stride.

“The Irish of #Fingal have voted once again for their own extinction,” O’Doherty posted on Twitter at the weekend.