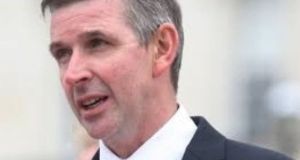 Sinn Féin has said it will support unionist and anti-Brexit campaigner Ian Marshall in this week’s Seanad byelection.

Sinn Féin has said it will support unionist and anti-Brexit campaigner Ian Marshall in this week’s Seanad byelection.

A former president of the Ulster Farmers’ Union Mr Marshall, who works in Queens University Belfast in the Institute for Global Food Security, was approached by Taoiseach Leo Varadkar to accept a Fine Gael nomination.

“I have met with Ian on a number of occasions in recent weeks and I have been impressed by his views on Brexit and the potential impact Brexit will have on the island, north and south.

“I believe Ian will be a strong Independent voice in the Seanad; providing an anti-Brexit unionist perspective, which is a welcome addition to the political discourse surrounding the issue in the Oireachtas.

“Brexit affects people from all backgrounds and ways of life; nationalist, unionists and everyone in between.”

“From his time as a farmer, as president of the Ulster Farmers’ Union, and his current position at Queen’s University, Ian is particularly qualified and experienced to advocate on behalf of farmers and the agri-sector; which faces massive challenges in the time ahead,” she said.

The by-elections will be held on Friday, April 27th, with the electorate members of the Dáil and Seanad.

The vacancies were caused by the resignations of Labour’s Denis Landy on health grounds, and Independent Trevor Ó Clochartaigh, formerly Sinn Féin, to take up a post as communications manager with TG4.