Shock and sadness on Falls Road at Martin McGuinness death

‘He did things some would not like him for, but you have to look at the whole picture’ 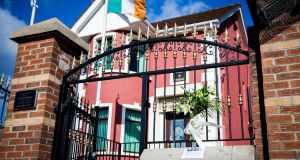 Lilies left in remembrance to Martin McGuinness at the gates of the Sinn Féin offices at Connolly House, Andersonstown, Belfast. Photograph: PA

History will judge Martin McGuinness kindly according to people living in the republican heartland of west Belfast.

There was a sense of shock and sadness among those on the Falls Road at news of the death of former Sinn Féin deputy First Minister aged 66, following a short illness.

It was the main topic of conversation among those in cafes and shops in the area and while one man told The Irish Times Martin McGuinness “was a bad man” the majority said they were saddened by his death.

Many described him as good man, an Irish patriot and a peace-builder.

At Pat’s Barbers one man said he had “too many good words to say about him” and another described him as “a statesman who had the courage to reach out to unionists”.

Harry Gargan, whose teenage sister Margaret was shot dead by the British army in the 1970s, said Martin McGuinness “was never going to please everyone”.

“He did a lot of things some people would not like him for, like shaking hands with the Queen, but you have to judge when looking at the whole picture. That’s what people have to do in those positions. Someone had to do it.”

Thomas Wiggins, whose grandfather was shot dead by the UVF in 1979, said at one time he would have “bowed down to Martin McGuinness and Gerry Adams” but he stopped voting for Sinn Féin and moved to People Before Profit because he did not see enough positive change in his area and because he believes they let down the hunger strikers.

He said while critical of Sinn Féin, he respected what Mr McGuinness did for the people of Derry.

“He did well for the whole of the North of Ireland, ” he added. “I am 34 and I didn’t see a smile on (Rev Ian) Paisley’s face until he was with Martin McGuinness.

A woman in her 60s called Carol said if she had grown up in the Bogside in Derry as a man she would have done what Martin McGuinness did in the IRA.

“He took part in the conflict and wanted the British army out of Northern Ireland and then eventually he took the road of peace talks and the Good Friday Agreement,” she said.

“He took big steps that didn’t go down well in some republican quarters but he did it anyway. He took great risks and put up with a lot at Stormont and from the British government.

“We will remember him for the peace that he brought.”

Pauline Smyth (58) acknowledged tributes to him would perhaps be difficult for IRA victims but said he would be remembered “for the work he did for the peace process more so than anything else.” “I would view him as a patriot and a peace builder,” she said. “He will be judged as a good man.”

On the future for northern society she said until Arlene Foster “catches herself on” it will be difficult to make progress.

American tourists David and Holly Sysko from Maine, who are visiting Belfast said they were there to “witness a place in transition and to get exposed to murals and memorials about The Troubles” that reflect the experiences of men like Martin McGuinness.

Ms Sysko said: “George Mitchell who helped negotiate the peace agreement is from Maine so we have some attachment in that way.

“In some ways where our county is at right now with a lot of turmoil we realise how close you can be to civil unrest in a variety of ways.

Taxi driver Sam Ervine compared the journey the late loyalist PUP leader David Ervine had with that of Mr McGuinness.

“People like David Ervine and Martin McGuinness moved away from what they did and went on to push for peace. “It must have been hard for them.

“Sinn Féin wouldn’t be the party I would vote for but Martin McGuinness did a lot of good when he was here. He did the world of good up at Stormont.”

Isolated dementia sufferers are ‘falling off a cliff edge’ 15:28
Ten pregnant women at Dublin maternity hospital test positive for coronavirus 15:27
Coronavirus: Contact tracing to be extended to suspected cases in effort to combat Covid-19 15:06
Coronavirus: Warning that 3,000 people could die in North over 20 weeks 14:59
Coronavirus: Irish death rate from Covid-19 rises to 2.4% of cases 14:48