Seanad to be recalled on August 20th 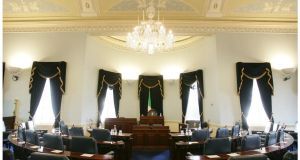 After rising for the recess last month, the Seanad had not been due to sit again until next month.

The Seanad is to be recalled from its summer recess early to discuss EU organ donation law.

Cathaoirleach Paddy Burke today said he has summoned Senators for a sitting on Tuesday, August 20th.

The sitting takes place after Fianna Fáil Senator Mark Daly secured the signatures of 20 Seanad members supporting his campaign for a recall.

After rising for the recess last month, the Seanad had not been due to sit again until next month.

Mr Daly, who was nominated to the Seanad by the Irish Kidney Association, argues the law is seriously flawed. Mr Daly claims Minister for Health James Reilly incorporated the EU law into Irish legislation, eight months before the Oireachtas health committee had hearings on Government proposals to change the system of organ donation to one of “presumed consent”.

Mr Daly’s initiative has been dismissed as a Fianna Fáil stunt by Fine Gael.

The motion to be debated is: “That Seanad Éireann resolves that Statutory Instrument Number 325 of 2012 - European Union (Quality and Safety of Human Organs Intended for Transplantation) Regulations 2012 be annulled.”

For the law to be changed, the approval of the Dáil would be required before the end of the month. This is considered unlikely in political circles, not least because of the Government’s large Dáil majority.

The recall campaign comes ahead of the referendum to scrap the Seanad in October.