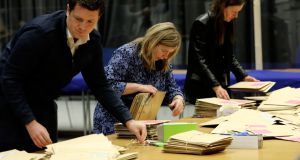 Fianna Fáil and Fine Gael will have a majority in the Seanad if they form a coalition following the completion of the marathon five-day vocational panel election count.

Fianna Fáil won 16 seats, up two, while Fine Gael has 12, down from 14 in the last Seanad. A Government requires a minimum of 31 for a majority in the 60-seat Upper House.

Taoiseach Leo Varadkar confirmed he will use Fine Gael’s share of the 11 Seanad members appointed by the next taoiseach as an “accelerator” to get more women into the Oireachtas, if part of a new coalition, after the party failed to get any women elected to the Seanad.

The party’s TDs, senators and councillors largely ignored his appeal to them in a letter to support women, and Fine Gael senators Maria Byrne, Gabrielle McFadden and controversial senator Catherine Noone lost their seats in the Seanad election.

A spokesperson for Fianna Fáil leader Micheál Martin said Seanad appointments “are a matter for discussion between the leaders if a programme for government is agreed. Fianna Fáil is delighted to have three strong female candidates elected in these Seanad elections.”

The Green Party has two seats, while there are four Independents on the vocational panels. Independents Brian Ó Domhnaill and disabilities campaigner John Dolan lost their seats, but colourful Independent councillor Sharon Keogan is a newcomer to the House.

In the administrative panel Fianna Fáil secured three seats, including one for former Kildare TD Fiona O’Loughlin. Kerry Senator Mark Daly topped the poll for the panel and was elected on the first count, but outgoing party senator Lorraine Clifford-Lee lost her seat with a low first-preference vote, while Diarmuid Wilson retained his.

Fine Gael’s Martin Conway retained his seat on the panel and party colleague and Tipperary councillor Garret Ahearn was also elected. However, former Fine Gael TD Noel Rock failed to get elected, trailing from the outset of the count.

Dublin Labour councillor Rebecca Moynihan also made it to the Seanad, gaining a seat on the panel, while Belfast-based Sinn Féin Senator Niall Ó Donnghaile retained his seat.

Minister for Social Protection Regina Doherty, who lost her seat in the general election, did not rule out staying on in Cabinet as a Seanad nominee.

Asked about the issue on RTÉ she said she had “made my peace with losing my seat but regret it now more than ever”.

However, some Fine Gael members said there would be a lot of concern among the party’s TDs that such a move would affect the positions of elected female Ministers in a coalition, given the party’s limited number of potential cabinet places.