SDLP says ‘new economic accord’ needed as it unveils manifesto 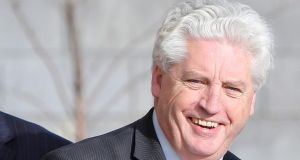 SDLP leader Dr Alasdair McDonnell has called for a “prosperity process rather than continued austerity” when launching his party’s Westminster general election manifesto in Belfast on Wednesday.

Dr McDonnell emphatically ruled out supporting David Cameron to be the next British prime minister in the event of a hung parliament. In response to one journalist’s question he replied, “You are asking me would we work with the Tories? No.”

He said that Labour would remain the SDLP’s sister party at Westminster after the election on May 7th but that the party would not necessarily support all Labour’s policies. “We will take our own counsel when the results come in and act in the best interests of this region,” he added. Dr McDonnell called for a “new economic accord” and blamed the latest political impasse over welfare reform on the leadership of DUP First Minister Peter Robinson and Sinn Féin Deputy First Minister Martin McGuinness. “Sadly we have to conclude that our ship of state is dead in the water,” he said when launching the manifesto “Prosperity, Not Austerity”.

“The first mate and the deputy first mate are up on the bridge looking around them, but they can’t agree on a course much less get their engines going,” he added. “In the last eight years they have not sailed an inch. In fact they have no ambition to sail anywhere. As we begin drifting towards the rocks their only interest is in blaming each other. This is not good enough. This is unacceptable, for me, for my children and for the future. There is a better way to do politics,” said Dr McDonnell.

Calling for a new “new economic accord” the SDLP leader said building a “sustainable economy” was vital to the future of Northern Ireland. “We would seek with the support and help of the Irish Government to negotiate a new economic accord with the (British) treasury for up-front investment as part of a plan to gradually wean our society off subsidies,” he said. “Our deficient economy really is the elephant in the room, the key to all other policy areas. We need to fix it so it will generate the tax revenues to fix our society,” added Dr McDonnell.

“Nowhere is it written that Northern Ireland must be subsidised until the end of time, or that our young people must emigrate in droves. A century ago our industry led the world. Now in the 21st century, as all of Europe takes up the challenge of reindustrialisation, we must too,” he said. Dr McDonnell said what Northern Ireland had now was “sham politics”. He called for a strategic plan as part of a process to “wean our society off subsidies”.

“We want the peace process to be brought to completion by a prosperity process,” he said. It would be difficult and complex restructuring the economy but the SDLP would “roll out a roadmap” to achieve that ambition, said Dr McDonnell. The SDLP is standing in all of the North’s 18 constituencies and is hoping at the very least to return its three MPs in the constituencies of South Belfast, Foyle and South Down, respectively held by Dr McDonnell, Mark Durkan and Margaret Ritchie.