Chief executive pulls out of an appearance before Oireachtas committee 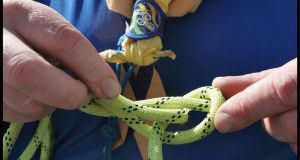 Scout camp. Gardaí are investigating a scout leader who allegedly abused a 12-year-old boy on a camping trip more than three years ago. Photograph: Brenda Fitzsimons

Scouting Ireland has said it was “unaware” that an active male leader was the subject of a Garda investigation into alleged child sexual abuse.

In recent weeks, An Garda Síochána has sent a file to the Director of Public Prosecutions (DPP) over an alleged case of child sexual abuse during a scout camping trip in 2014, at Larch Hill, south Co Dublin.

Gardaí are investigating a scout leader who allegedly abused a 12-year-old boy on a camping trip more than three years ago. The alleged incident was reported to Garda early last year.

Scouting Ireland chief executive Dr John Lawlor said the youth organisation “was not aware of any ongoing Garda investigation” in relation to the male volunteer.

Dr Lawlor said last August that “a letter from Tusla to the adult volunteer stated their investigation had found the allegation made against him was unfounded”.

On that basis the man was readmitted into the organisation, he said.

“We have written to Tusla seeking an urgent meeting to better understand the situation” Dr Lawlor said.

The allegation claims the male leader entered the boy’s tent at night, at Larch Hill campsite, and sexually abused him. The male leader was in the same scout troop as the boy at the time, and the juvenile member has since left the group.

A spokeswoman for Tusla said an assessment of a child abuse allegation can have two outcomes, founded or unfounded. However, “the finding of a Tusla assessment may not correspond with the outcome of a criminal investigation”, she said.

This is primarily as gardaí have more powers to investigate allegations, and “may establish further evidence, which was not available to Tusla when it was required to make a determination,” the spokeswoman said.

“Under current legislation Tusla has no power of compellability to require participants to engage in our assessment” the spokeswoman said. She added that the agency could not comment on specific cases.

Scouting Ireland only learned a file had been sent to the DPP in the case, following a report on Saturday in The Irish Times, which Dr Lawlor described as “deeply concerning”.

Dr Lawlor has pulled out of an appearance before the Oireachtas Committee on Children and Youth Affairs scheduled for Wednesday.

Representatives from Scouting Ireland were due to answer questions on the organisation’s governance and child protection policies. Dr Lawlor apologised for having to decline to appear on short notice, in a letter to the committee on Monday. “ I hope you will understand the significance of issues that unfolded over the weekend,” he said.

Committee member Sean Sherlock TD said he found the “snub” from the youth organisation was “ill advised” and “a little disrespectful” of the Dáil.

Alan Farrell TD, chair of the committee, expressed “disappointment” at the decision, adding he hoped Scouting Ireland could appear before the committee “as soon as possible”.

Dr Lawlor committed to come before the committee after an independent barrister-led inquiry into four senior volunteers’ actions in the handling of a rape complaint from 2016 was concluded.

The inquiry is expected to be finished by the end of May. The investigation was set up following a confidential review by child protection expert Ian Elliott into the treatment of the 2016 complaint, in which a female leader claimed she was raped by a male leader on a camping trip seven years earlier.

The actions of four senior volunteers were criticised in Mr Elliott’s review: chief scout Christy McCann, chief commissioners David Shalloo and Thérèse Bermingham, and board member Ollie Kehoe. The officers have all temporarily stepped aside, pending the findings of the inquiry.