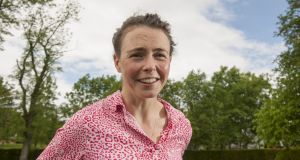 Saoirse McHugh said that a “true Green New Deal recognises that action to combat climate change will not be successful unless it simultaneously ushers in social and economic reforms that will distribute opportunity more fairly and tackle inequality”. Photograph: Michael Mc Laughlin

The programme for government does not offer a Green New Deal, but a “greener business as usual” according to Green Party general election candidate Saoirse McHugh and three fellow candidates.

The Mayo woman and three party colleagues have appealed in an open letter to members the European election constituency she was a candidate in and the midlands to vote against the programme for government agreed by the party, Fianna Fáil and Fine Gael.

The letter appealed to members in the midlands, north-east, west, and north- west.

It echoes comments from the party’s finance spokeswoman Neasa Hourigan who also opposes the deal and who said on RTÉ that people kept telling her document “had got green fingerprints throughout it but it’s green fingerprints on a very blue canvas”.

Ms McHugh and candidates Tate Donnelly (Cavan-Monaghan) Julie O’Donoghue (Roscommon-Galway) and Seán McCabe (Meath East) said that a “true Green New Deal recognises that action to combat climate change will not be successful unless it simultaneously ushers in social and economic reforms that will distribute opportunity more fairly and tackle inequality”.

They deny they are being idealistic, insisting their position is “a pragmatic one” and pointing to a report by the St. Vincent de Paul charity that the state spends about €4.5 billion every year addressing poverty and “that is more than recent Government budgets for housing, justice, transport and agriculture”.

The group recognises that people “are anxious to see a government formed at this time of uncertainty, and we know that the climate crisis requires urgent action”.

They accepted that a ‘no’ vote comes with uncertainty, but the decision had to be based on the evidence which was the programme, Fine Gael and Fianna Fail’s track record on climate and social justice and how junior coalition partners fared in recent governments.

And they said “the need for urgency makes it all the more important to consider inequality. To be fast, climate action must be fair. Policies that hit the most vulnerable in society the hardest and exacerbate inequality are neither just nor effective.”

The four Green candidates claim that the economic vision in the programme “commits to annual deficit cuts and balanced budgets at a time of huge uncertainty where deficit spending may well be necessary, and cuts are almost certainly going to hit upon the most vulnerable the hardest”.

In the two-page letter the four candidates also acknowledge the commitments in climate action and transport are improvements compared to existing policy but said Ireland has lagged behind EU neighbours for decades and the promises “will not make us leaders in these areas”.

The heads or early draft of the Climate Action (Amendment) Bill published by Fine Gael in January contain “much of what is being celebrated as wins” including binding carbon budgets and sectoral targets, while commitment on “renewables, retrofitting and heat pumps are the same as existing targets under the Climate Action Plan”.

And they said the commitments on housing and healthcare did not offer assurances would be “robustly addressed”.

A true Green New Deal “understands that climate action which makes life harder for people will be resisted, successive targets will be missed, and the opportunity to avoid catastrophe lost”.

“The programme for government does not offer a Green New Deal, but something more akin to a greener business as usual.”

They wanted “deep, transformative change” for a safer and fairer future and a “just transition to a zero carbon future” but that is not what is on offer in the document or the proposed coalition.