War crimes and rampant inequality are of greater importance 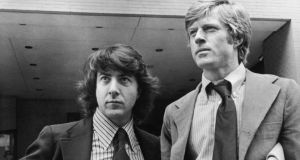 Dustin Hoffman and Robert Redford as Carl Bernstein and Bob Woodward in the film All The President’s Men. Photograph: Warner Bros/Getty Images

Carl Bernstein was one of the two Washington Post reporters who broke the Watergate story in 1972, which caused the resignation of Richard Nixon as president in 1974.

Watergate has been the cause celebre of investigative journalism. I and many others who were young in journalism at the time were inspired by Bernstein and his colleague, Bob Woodward. We were naive. And wrong.

Carl Bernstein, speaking at the Dalkey Book Festival on Sunday evening, was asked if a scandal similar to the Watergate scandal could happen again. He replied that Richard Nixon was “sui generis”, he was uniquely corrupt and it was hardly thinkable that any US president would be so irremediably crooked.

In support of that contention he said new information about Richard Nixon had emerged which showed that he had attempted to denigrate the name of his predecessor in the White House, Lyndon Johnson, and he even had urged that a safe supposedly holding incriminating documents concerning Lyndon Johnson be blown open. Also that Richard Nixon had instigated surveillance on political reporters and journalists to an unprecedented extent.

The Watergate scandal was about the funding and then the cover-up of a breakin at the headquarters of the Democratic National Committee headquarters at the Watergate complex in Washington on 17 June 1972. The illegality, its cover-up and the persistent lying by the president and his aides were reprehensible. But what those of us overawed by the Watergate exposé at the time missed was that the story did not matter very much, or at least it did not matter remotely as much as another story then current, a story which Carl Bernstein did not even mention among the crimes of Richard Nixon during his presidency.

This was the bombing of Cambodia from 18 March 1969 to 26 May 1970 during which the United States dropped 2.7 million tons of bombs on Cambodia, exceeding by almost one million tons the total dropped on Japan during the Second World War, including the bombs that were dropped on Hiroshima and Nagasaki.

Richard Nixon undertook this onslaught while lying to the American people and to Congress about what was going on - incidentally, the bombing was almost certainly illegal for the American Constitution reserves the power to declare war to Congress. It is estimated that over half a million people in Cambodia were killed in that conflagration.

The impeachment inquiry into Richard Nixon’s conduct made no mention of that war crime. Neither did any of the reporting of the Nixon presidency by Carl Bernstein and Bob Woodward even allude to that and, clearly, Carl Bernstein still seems to regard that mass slaughter in Cambodia as of less significance than a botched clandestine burglary of an opposition party’s headquarters. Incidentally, it is not that nobody knew about the bombing of Cambodia at the time; the New York Times reported on it.

The Watergate story did involve meticulous and relentless reporting, which was/is admirable, but compared with the massacre of half a million people this was trivial stuff. How was it that the mainstream American media ignored what was happening in Cambodia and was transfixed by the (relative) triviality of Watergate?

Similarly now, in America and here.

Hardly ever in the mainstream media is there any acknowledgement of perhaps the single most salient facet of American society: the deep inequality there. The richest one per cent of Americans have a mean household income of $1.3 million, the bottom 40 per cent have a mean household income of $17,300. The mean household net worth of the top one per cent is $16.4 million, for the bottom 40 per cent it is - $10,600 (note: minus). (Will Domhoff, University of California http://www2.ucsc.edu/whorulesamerica/power/wealth.html).

According to the US Census Bureau, in 2011, the official poverty rate was 15.0 per cent. There were 46.2 million people in poverty. The poverty rate for children under age 18 was 21.9 per-cent.

There are similar wilful denials in the Irish media and in our political culture. According to the Revenue Commissioners, 54 per cent of Irish earners are paid less than €30,000 a year and their average pay is around €14,000? And also according to the Revenue Commissioners, that the 108,736 “earners” (in some instances married couples incomes are counted) getting over €100,000 a year, with an average income of €182,750 per year, pay just 26 per cent in income tax. This was disclosed in a written answer to a Dáil question last April and has got almost no attention. Indeed some economic commentators and others in academia, search feverishly for “proof” that inequality here is actually not that bad at all or that it has lessened marginally, as though that makes it fine.

Many of us in journalism, including me, have spent a lot of time investigating, reporting and commenting upon the actual and alleged corruption of politicians, while ignoring how, in the meantime, a corrupt society has evolved. A society where a large section of the population is disrespected and belittled, excluded from any meaningful say or influence on what is happening to their society and, incidentally, dying prematurely at the rate of around 5,000 a year. And, along the way, this society gives whatever hand it can to the world’s warmongers.