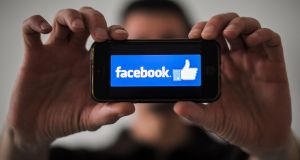 Facebook – and its founder, Mark Zuckerberg – were singled out for particular criticism. Photograph: Loic Venance/AFP/Getty Images

A damning Westminster report that found Facebook intentionally breached data privacy and competition law and should be regulated has been strongly endorsed by the chairwoman of the Oireachtas Committee on Communications.

The report found online “fake news” is posing a threat to democracy and has described social media platforms as “digital gangsters”.

Hildegarde Naughton, chairwoman of the Oireachtas Communications Committee, said there was “absolutely no doubt that social media platforms need to be regulated, and harmful and illegal content removed as a matter of priority. This is not happening at present.”

“I have been at the fore in calling for such regulation in Ireland,” she said.

Ms Naughton said the Government had accepted the “days of self-regulation are over”.

The Westminster report is the culmination of an 18-month investigation by the House of Commons committee on digital, culture, media and sport into fake news, disinformation and what were described as “dark adverts”, all of which it found were harmful to democracy.

It concluded current British laws were not capable of dealing with practices such as hacking, use of multiple bots and the spread of malicious and hostile misinformation by anonymous actors.

Facebook – and its founder, Mark Zuckerberg, who refused to appear before the committee – were singled out for particular criticism.

“Companies like Facebook should not be allowed to behave like ‘digital gangsters’ in the online world, considering themselves to be ahead of and beyond the law,” the report stated.

Ms Naughton said she welcomed the robust conclusions and recommendations. The Fine Gael TD for Galway West participated in the Westminster hearings along with Green Party leader Eamon Ryan.

The all-party Oireachtas Committee will be considering the Digital Safety Commissioner Bill 2017, which will introduce legislation. She said the committee was unanimous in the need for legislation to regulate social media. At present, such companies self-regulate content.

Mr Ryan also welcomed the findings. “Our common experience was that social media companies such as Facebook are abusing their monopoly powers and need to be better regulated.”

“Despite directions coming from national regulators, the company ignored the instructions and continued with the inappropriate sharing and exploitation of users’ personal information.

“This culminated in the secretive use of the Facebook network during the Brexit referendum and US presidential election, which undermined their democratic systems.”

He said the Government has a special responsibility because the European headquarters of Facebook was located in Dublin.

Until now the Government has permitted tech giants to self-regulate. A private member’s Bill from Fianna Fáil TD James Lawless to regulate online political advertising has not progressed through the Dáil.

In response to the report, Facebook rejected the suggestion it had breached data protection and competition laws, and said it shared the committee’s concerns about fake news and election integrity.

“We are open to meaningful regulation and support the committee’s recommendation for electoral law reform,” said Facebook’s UK public policy manager, Karim Palant. “We also support effective privacy legislation that holds companies to high standards in their use of data and transparency for users.”

The backlash against online platforms’ treatment of users’ data began following disclosures of the widespread spreading of fake news and disinformation during the Brexit referendum and the 2016 presidential campaign in the US.

Questionable practices and breaches of privacy were highlighted by the Cambridge Analytica scandal last year. A data company collected the profiles of millions of Facebook users, without their knowledge and consent, with the aim of influencing electoral contests.