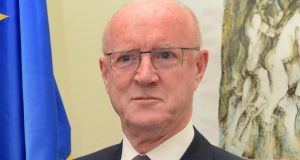 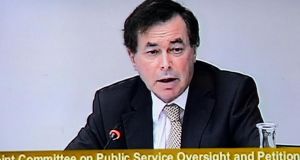 The Government has appointed retired High Court Judge John Cooke to conduct the independent inquiry into reports of surveillance of the Garda Siochána Ombudsman Commission (GSOC).

The appointment was announced tonight along with the terms of reference for the inquiry which has been tasked with establishing the facts surrounding the controversy.

The judge will examine all reports, transcripts, records, minutes, correspondence and documentation relating to the controversy and will consider any other evidence it deems relevant.

The inquiry is expected to be completed within 8 weeks.

Earlier, during a four-hour sitting of the Oireachtas Committee on Public Service Oversight, Minister for Justice Alan Shatter expressed doubt about the basis on which the Garda Síochána Ombdudman Commission launched an investigation into the suspected surveillance suggesting it was not proportional and was based on “feelings” not evidence.

Mr Shatter appeared before the committee to outline his response and actions in response to the revelation that GSOC investigated the possibility that a member of the Garda Síochána may have carried out covert surveillance of its offices.

He also told committee members that the investigaion into the controversy will not be confined to a review of documentation but the judge will also be allowed to invite people in and ask them questions.

Mr Shatter also relied on a “peer review” he commissioned from Irish IT security firm Rits to question the seriousness of two of the threats identified by a security firm hired by GSOC.

He said that the presence of a UK 3G mobile phone network in tests conducted from GSOC’s offices despite such networks not operating in the Republic was not of government-level and such devices could be purchased for €5,000 on the internet. He also said the range of such devices was 2 to 3 kilometres which included a wide area in Dublin City Centre.

He also said Rits had posited a theory in relation to the anomaly identified in a phone in the GSOC chair’s office. He said it suggested the returned phone call at 1am might have come from the GSOC switch rather than from a listening post. He said he did not have the technical knowledge to tell which version was correct but that task would be one for the High Court judge conducting the review.

It was also disclosed that the ‘trigger’ for the investigation was based on two employees of GSOC incorrectly interpreting a general staff briefing given by GSOC chairman Simon O’Brien last summer.

That had given rise to the false impression that the security sweep was prompted by a senior member of An Garda Síochána quoting a paragraph from an internal GSOC document when that was never the case. The two officials had mistakenly believe a senior garda was privvy to internal GSOC information and had then briefed Verrimus staff in that regard.

Mr Shatter said it was unfortunate that that had happened.

Mr Shatter repeatedly told committee members that he and his senior officials were concerned with the question of proportionality when deciding to investigate and suggested the decision was premature.

In a criticism of the GSOC decision, he said at the time, only two of the three “anomalies” had been identified by Verrimus - the security firm which conducted the sweep - and at that stage only vulnerabilities had been identified, with no indication of any garda involvement.

“The only concerns that led to the investigation were the two so-called vulnerabilities. There was no evidence as opposed to feelings on this issue.

“I am subject to political attack. I am told I am too close to the Garda Commissioner,” he said.

He also criticised GSOC for not finding out what wi-fi network the wireless device in the GSOC office was connecting to. Saying that it was a Bitbuzz network in the Insomnia cafe on the ground floor of the building, he argued: “If seemed to me if they were launching an investigation they would have taken time to check out [the identity of the outside network].”

Mr Shatter was responding to questioning from People Before Profit TD Richard Boyd Barrett who challenged the manner in which he made the statement to the Dáil and said the Minister had omitted or downplayed details that suggested surveillance took place.

“You clung to that phrase ‘no definitive evidence’. The experts found there may have been surveillance. It was that may have been prompted by the gardaí. Experts came in and found more threats.

“Nothing is definite about that. We do not know definitively but there was substantial evidence that they were bugged. Experts told them that one was of government-level technology. Any reasonable person would have concluded that an investigation was required.”