Rent measures to be excluded from budget after disagreement 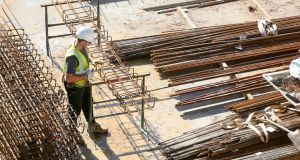 Ministers are discussing tax incentives to landlords who take in tenants who have a long-term housing need. Photograph: Bloomberg

Taoiseach Enda Kenny has said measures on rent, which the Government has failed to agree ahead of the budget, will continue to be worked on by the Coalition parties.

He said Minister for the Environment Alan Kelly and Minister for Housing were looking at a package of measures “that will deal with the question of the supply side” of housing, “which is the real problem here”.

Mr Kenny said discussions would continue between these two Ministers and Minister for Finance Michael Noonan to determine how to proceed “without interfering with the market to its disadvantage”.

He was speaking on his way into the final Cabinet meeting before the budget is presented.

It is understood the Ministers and their officials are at odds over proposals to tackle rising rents.

Mr Noonan has objected to the linking of private sector rent increases to the Consumer Price Index for four years. It is understood he is concerned that rent restrictions will have a negative impact on investment in the sector.

The housing measures to be announced on Tuesaday include an increase in funding to tackle homelessness. It is expected there will be a 20 per cent increase to bring the total budget to €70 million. There is also set to be a €56 million increase in capital spending for housing.

Mr Noonan and Mr Kelly are planning further meetings next week to reach agreement on the proposals. The two are expected to reach a compromise on waiving development levies for developers who build homes and agree to sell them at below market value.

Tax incentives will be provided in the budget to landlords who take in tenants who have a long-term housing need. It is expected mortgage interest relief will be waived for those who are in receipt of the housing assistance payment and the rent accommodation scheme.

Following a Cabinet meeting this morning, Mr Noonan will give his budget speech in the Dáil at 2.15pm.

He will set out tax measures before Minister for Public Expenditure Brendan Howlin announces spending plans for next year.

Mr Howlin is expected to outline increases in spending, which is expected to include some €300 million for the Department of Health. This is in addition to the €600 million supplementary estimate already agreed by Mr Howlin and Minister for Health Leo Varadkar.

Tánaiste Joan Burton is to announce a €5 increase in child benefit, two weeks’ paid paternity leave and a restoration of the respite care grant to €1,700. Ms Burton is also to confirm a €3 rise in the old age pension and increased spending on fuel allowance. The Christmas bonus will be restored to 75 per cent at a rate of €172.50 for a single person and €330 for a couple.

Minister for Children James Reilly will outline a new childcare package, with significant investment in the area, including free preschool from the age of three and an extension of the Community Childcare Subvention Programme, which offers disadvantaged parents reduced rates for childcare. He will also be given funding for the roll-out of afterschool care.

Minister for Justice Frances Fitzgerald is expected to confirm the recruitment of up to 700 new gardaí and to announce investment in specialist operations to stem the number of burglaries.

Minister for Education Jan O’Sullivan has secured funding to reduce the pupil-teacher ratio from 28:1 to 27:1.