Regulator says Irish Water should not proceed with metering 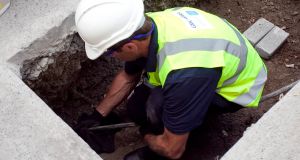 Irish Water should stop installing water meters in homes, the Commission for Energy Regulation (CER) has declared, warning that the cost of completion will cripple efforts to improve water quality and supply.

In a submission to an Oireachtas committee which is investigating options, the CER – Ireland’s water regulator – said finishing the programme was not a priority.

So far 58 per cent of households have had meters put in place – the installation efforts have been strongly opposed in some places – but several hundred thousand properties remain to be linked. No money has been put in Irish Water’s 2017/18 capital budget to finish the work.

“If a decision was taken to complete further metering then either significant additional funding would have to be made available or a significant level of necessary capital expenditure would have to be deferred from other priorities for water investment for the time period 2017-2018,” the CER.

This commission proposed water be funded by general taxation and each household be given an average allowance to be determined by the CER.

The regulator says it will consult publicly before deciding on allowances and and penalties for excessive usage.

In a separate submission, Irish Water said €13 billion must be invested in Ireland’s water and waste-water services to ensure safe drinking water and proper sewage treatment.

Irish Water said it does not believe water services should be funded wholly or largely through the Exchequer since this would put investment in competition with public spending demands. It said guaranteed funding was needed.

“Shortfall in funding tends to disproportionately affect the performance of the system since fixed costs [staff, chemicals, and energy] must be met, so that any shortfalls have a direct and rapid impact on the condition of the assets and the operation of the service.”

Irish Water confirmed that €714 million would be needed this year – the annual €475 million subvention plus €239 million replacement revenue in lieu of previous domestic billable income.

The Oireachtas committee will meet Thursday to hear from Irish Water, the CER and officials from the Department of Housing.