High costs ‘one of the main barriers’ for people in accessing justice, says McEntee 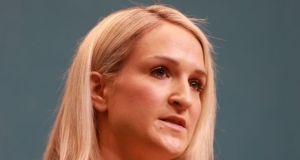 Minister for Justice Helen McEntee welcomed the report and said she was committed to implement the reforms. Photograph: Nick Bradshaw/The Irish Times

The group, chaired by former president of the High Court, Mr Justice Peter Kelly, made more than 90 recommendations including the increased use of video hearings, a dramatic reduction in paperwork and forms, as well as a move to simplify the often archaic language still used in Irish law.

However the 16-person committee, which included six judges, could not agree on what measures to adopt to reduce litigation costs. A majority preferred the drawing up of guidelines for costs levels, while a minority favoured a table of maximum costs levels be prescribed by a new litigation costs committee.

Minister for Justice Helen McEntee welcomed the report and said she was committed to implement the reforms which will reduce costs and streamline the system.

“Legal costs in Ireland are too high and the time involved in cases is much longer than other countries. We know the high cost of litigation is one of the main barriers for many people in accessing justice,” she said.

She promised to publish an implementation plan by February.

Among the specific recommendations made by the review group was a single document, rather than multiple documents, to commence proceedings in the District Court.

It also concluded the language and terminology in Rules of Court should be simplified and that video-conferencing should be promoted for the taking of expert and other evidence.

Another modernising recommendation was “an online information hub” for those considering bringing proceedings without professional representation.

The group also examined ways in which judges could spend more time hearing cases. That could be done, it concluded, by hiring staff to handle procedural matters such as case management conferences.

Recommendations also include the introduction of a more efficient and more cost-effective regime for discovery, the process whereby parties inspect each other’s documents, as well as a review of the criteria governing access to civil legal aid.

There was also a view that cases that have not progressed 30 months after commencement should be discontinued.