Child and Family Agency must be more transparent, Pat Rabbitte will tell committee 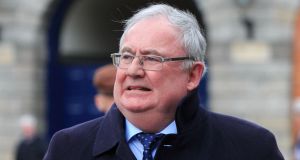 There are legacy issues and cultural changes that must be confronted within Tusla, according to its new chairman Pat Rabbitte.

The former Labour Party leader is due to tell an Oireachtas committee resources are “finite” and the recruitment of professional staff, in particular social workers, is “very challenging”.

Mr Rabbitte will also say Tusla needs to be more transparent and there is no reason why the agency should “fear greater openness”.

Mr Rabbitte is due before the joint Oireachtas committee on children and youth affairs on Wednesday morning to discuss his appointment and his strategic priorities for his term of office.

He will tell the committee deficiencies in the agency have been highlighted in recent years and it is “undeniable” challenges continue to exist.

“It is also undeniable that there is a transformation under way in the priority that public policy now attaches to caring for vulnerable children and in supporting families who need assistance as compared to even more recent history,” he will say.

“As regards the quality of service and consistency of practice, it is unavoidable that there are legacy issues and cultural changes that must be confronted.”

Mr Rabbitte is also due to say additional resources over the past couple of years are “very welcome” but that “there will never be sufficient resources to meet the challenges”.

“In respect of the core business, the shortage of social workers leaves the agency vulnerable to criticism where non-compliance with best practice is sometimes established,” he will say.

Mr Rabbitte is also expected to tell the committee “considerable progress” has been made since Tusla’s establishment in 2014 and there has been “little enough attention” given to the “very positive narrative” it has to tell.

“Tusla has come through a difficult time over the past 18 months or so. In my view the agency is stronger for it provided that we can show that we have learned the lessons,” he will add.

“The challenge of caring for vulnerable children and families will never attain perfection. However, an enormous amount of thought and work has gone into bedding down the agency and in evolving best practice.”

Mr Justice Peter Charleton criticised Tusla over its handling of an incorrect sexual abuse complaint made against Sgt Maurice McCabe in his final report at the end of the Disclosures Tribunal last year.

Mr Rabbitte’s appointment was confirmed by the Cabinet at its last meeting before Christmas. Mr Rabbitte, who has served as a public representative for 30 years, was appointed by Minister for Children Katherine Zappone following a selection process and began his new role on January 1st.