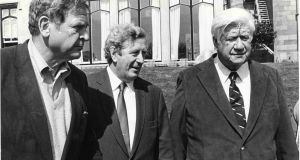 ‘Your paper is Dublin? That’s south of the Border, right?” This was Governor Ronald Reagan, in an interview in Baltimore, Maryland, on October 10th, 1979, when he was campaigning for the Republican nomination for president.

I had been promised five minutes with him in a room in the Hunt Valley Inn, but in the end we talked as he moved between meetings with fundraisers. It wasn’t a propitious start.

However, as we set off down a long, carpeted corridor the former Hollywood star, whom I suspect had not thought much about the Troubles in Northern Ireland, made a couple of surprisingly perceptive comments.

“We should always be willing to help,” he said, “but it would have to be at the invitation of the two adversaries. Anything that would help end the bloodshed, the United States should put itself on the line in whatever way it could.”

With these remarks the future president outlined a policy that would result, six years later, in the Reagan White House leaning on British prime minister Margaret Thatcher to reach an historic Anglo-Irish accord to bolster constitutional politics in Northern Ireland.

Before the 1980s American policy had been governed by the State Department’s mantra that Northern Ireland was an internal problem for the United Kingdom, America’s closest ally in the Cold War. Only the British got a hearing in the White House.

Even President Kennedy, on his visit to Ireland en route to London in 1964, curtly refused an Irish request to raise partition when he met the British prime minister Harold Macmillan.

During Reagan’s presidency the two “adversaries” he had in mind when he spoke to me – the British and Irish governments – began negotiations on an Anglo-Irish agreement and, as he promised, he did “put himself on the line” when Thatcher and taoiseach Garrett FitzGerald created a new process in which the White House could get involved without alienating the UK.

Urged on by John Hume and Irish diplomats, the Congressional Friends of Ireland in Washington – prominent among them was House speaker Tip O’Neill – began to lobby the White House for support, and found that they were pushing a half-open door.

When the Anglo-Irish talks seemed to falter after Thatcher’s “Out! Out! Out!” dismissal of the New Ireland Forum on November 15th, 1984, Reagan agreed to encourage Thatcher to adopt a more flexible attitude and continue working towards a historic compromise.

O’Neill was enormously important in this effort as the Republican president needed his co-operation in the Democrat-controlled Congress.

So too was a former national security adviser William Clark, a close friend of the Reagans.

At the urging of Irish ambassador Sean Donlon, Clark urged the president to express a desire for progress in Ireland when he met Thatcher at Camp David on December 22nd, 1984.

Reagan did so, against the specific advice of the State Department, though he limited himself to citing a letter from O’Neill appealing for her to be “reasonable and forthcoming”. It was enough.

FitzGerald would later credit Clark’s intervention as crucial in securing American support for the Anglo-Irish Agreement.

By then Reagan had developed an emotional bond with Ireland and the Irish, reinforced by a visit to his ancestral village of Ballyporeen in Co Tipperary in June 1984.

It also helped that the FitzGeralds and Reagans came from the same Tipperary hillside and in days of old had been godparents at each others’ christenings, according to the late taoiseach’s son Mark.

On February 20th, 1985, two months after Camp David, Thatcher returned to Washington to address the joint Houses of Congress.

She was assailed on all sides about Ireland. O’Neill urged her to include positive news on Northern Ireland in her address.

Even British diplomats advised Thatcher to insert a reference to a new era of co-operation between the Irish and British governments.

The result was a commitment to Congress by the Iron Lady that she would co-operate with Dublin in reaching a political accord. She even expressed a hope for continued American support to find a way forward.

The State Department attitude on Ireland had by then evolved considerably. Soon afterwards secretary of state George Shultz gave an assurance of American financial support for an agreement, a commitment which would result in the creation of the International Fund for Ireland.

After the Anglo-Irish Agreement was signed on November 15th, 1985, Thatcher herself acknowledged the important role of the US.

“It was the pressure from the Americans that made me sign the agreement,” she confessed to her adviser Lord McAlpine.

Thatcher in time expressed buyer’s remorse. But as recorded in Charles Moore’s recently-published biography, Margaret Thatcher, she later acknowledged that “the Anglo-Irish Agreement put us on side with the Americans”. There was something in it for her too.