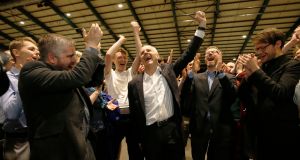 The Green Party’s Ciaran Cuffe with family and party colleagues after he was elected at Simmonscourt count centre, RDS. Photograph Nick Bradshaw

Q: What kind of government would we get with the Greens? A: The best guide is the party’s 2016 general election manifesto. Some ideas have been overtaken by time – the repeal of the Eighth Amendment, for example, but the main thrust is unsurprisingly focused on climate change, the environment and sustainable living.

The goals are ambitious. If followed through they would involve serious adjustments in the way people live their lives. What will surprise, however, is the manifesto is incremental, realistic and grounded in an acceptance it would “heed the advice of the Irish Fiscal Advisory Council” about spending caution. The Greens tend to mix highly aspirational global visions with practical local solutions. They attract some, but drive away others, who see the Greens as unrealistic sandal-wearing Luddites, to distraction.

Q: So what would the party do on spending? A: Like every party, they like spending no matter what else they say. If in power after 2016 it wanted €1.5 billion extra spending in the first year, offset by €500 million of new taxes, leaving a net spend of about €1 billion.

The biggest individual idea was the Citizens’ Trust Fund. Every new baby born would have €5,000 invested by the National Treasury Management Agency in a fund that would reach maturity when the child reached 20. By then it would be worth up to €20,000, and the money could be used for education, volunteering, a gap year, Erasmus or other training. That would have cost €330 million a year. It wanted €300 million a year more for third-level institutions; €350 million for childcare; and €170 million a year to prepare for climate change.

Q: But would not its climate change policies be ruinous? A: Ireland, the Greens insisted, should always have been in the vanguard of change. Emissions should be cut by 80 per cent by 2050. The State should be carbon-neutral by then too. Fossil-fuel exploration should be banned, including fracking. Moneypoint should be closed within five years. Recycling rates should rise to 70 per cent. It supported water charges, and it still does; as well as increases in landfill levies.

Some of its biggest changes were included in its proposal for a new national development plan, not in the election manifesto – including measures to “discourage” one-off rural housing in favour of clusters of houses.

Q: What are the measures it proposed in transport? A: The manifesto was drawn up in pre-electric scooter times so it was silent on that subject. Back then, interest in electric cars was very small, and the party proposed a relatively modest €10 million to stimulate demand. It wanted money shifted from private to public transport, including €1 billion on bus corridors; a Luas line to Finglas; a light rail for Galway; and support for Metro North and the Dart underground.

A tenth of all transport spending should be ringfenced for cycling, it argued then – including dozens and dozens of new cycling routes and changes to the 50 “most dangerous junctions in the State”. Cyclists should be always allowed to turn left even when a traffic light was red so long as they gave pedestrians priority. Walkers should be helped too. Speed limits of 30km/h should apply in all residential areas, while no pedestrian should have to wait more than 30 seconds at crossings.

Q: Surely, there is little in the manifesto for farmers? A: The party has tried not to preach to farmers, though everything it believes suggests a cut in the size of the national herd. One in 20 farms should be organic by 2021. All GMOs should be banned. Farmers should be helped to support habitat creation, move away from monocultural grazing, and support biodiversity. Community-led food markets selling local produce should be the norm, it argued.

Live cattle exports would be banned, but farmers would be encouraged to process veal in Ireland rather than exporting young cattle on the hoof. Some 15,000 hectares of new forest should be planted each year by 2030, which was twice the target of the last government.

Q: Were there any other unusual policies? A: Quite a few. One of the most interesting, and most costly, was the idea of providing free school dinners to pupils, costing up €50 million a year.

It also wanted the town councils (abolished by former minister for the environment Phil Hogan) to be restored; 2,000 new gardaí; and the replacement of the Health Service Executive with community health organisations. Every child should be able to experience “two weeks’ learning in nature” each year.