Taoiseach Micheal Martin said that pubs that are not serving food will stay closed until September and restrictions on gatherings will also remain. Video: RTE 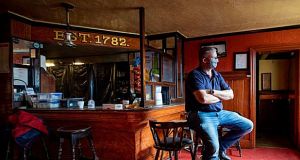 Mulligan's pub owner Gary Cusack at work in the Poolbeg Street bar today ahead of the Government announcement on phase-four reopening. But the Coalition decided to delay the already-paused opening up of society for a further three weeks. Photograph: Tom Honan/The Irish Times

Pubs that do not serve food and nightclubs will remain closed until September at least, the Cabinet has decided, in a significant tightening of societal restrictions to curb the recent increase of Covid-19 cases in Ireland.

In a blow to the licensing industry, the Government yesterday decided to delay the already-paused phase four of reopening society for a further three weeks.

Besides pubs remaining shut until at least September 1st, the current strict limits of 50 on numbers congregating indoors, and 200 outdoors, will remain in place, a move that disappointed many sporting bodies and wedding venues. The numbers had been due to increase to 100 indoors and 500 outdoors.

In a press conference following the Government meeting, Taoiseach Micheál Martin also announced face masks will become mandatory in all shops and retail centres from Monday, and pubs serving food and restaurants will be required to close at 11pm.

Separately, the Cabinet also decided to remove five states or territories from the “green list” of 15 from which passengers arriving into Ireland would not need to quarantine. They are Malta, Cyprus, San Marino, Gibraltar and Monaco.

The decision to keep all restrictions in place came as a surprise.

Mr Martin justified the decision in light of recent coronavirus figures which have seen the 14-day incidence of cases triple in the last month.

“I know that this will come as a blow to pub owners and I want them to know that I have enormous sympathy for their plight.

“This virus is taking away their ability to earn a living.”

Vintners’ representatives responded angrily to the decision saying the Government had abandoned the 3,500 smaller pubs across Ireland now facing a “full-blown crisis”.

Tánaiste Leo Varadkar said Ireland had lost some ground in its battle with coronavirus. “The truth is the pandemic is blazing around the world. In fact it is worse than ever,” he said.

“Even in Europe the number of new cases is rising again,” he said, though he said it was largely under control in the EU.

The decision to retrench the current phase of lockdown came after a further 45 confirmed cases was confirmed by the National Public Health Emergency Team (NPHET) on Tuesday.

Minister for Health Stephen Donnelly said the average number of cases had increased in 14 of the 15 “green list” territories and countries over the past two weeks.

“NPHET’s view is the situation is ‘finely balanced’ and it would not take much for these cases and new clusters to spill into community transmission,” said Mr Donnelly.