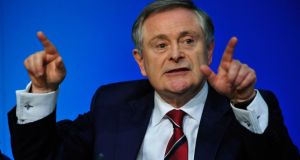 Minister for Public Expenditure and Reform Brendan Howlin: while he said he would not carry out his negotiations in public, sources disclosed that the allocation for public pay rises would fall between €250 million and €300 million in 2016. Photograph: Aidan Crawley

Public service workers are set to gain on average more than €800 each as part of the Government’s reversal of pay cuts.

The Irish Times understands the Government will allocate around €250 million – and possibly up to €300 million – as part of a deal to partially restore pay levels for nearly 300,000 public servants.

Public service staff who will benefit from the new deal will also gain from tax cuts promised by the Government.

In last week’s spring statement Minister for Finance Michael Noonan and Minister for Public Expenditure and Reform Brendan Howlin announced they would have a maximum of €1.5 billion to spend in the October budget.

The money would be split evenly between tax cuts and spending increases, but any public sector pay rises would have to come from within Mr Howlin’s €750 million maximum allocation.

While Mr Howlin said he would not carry out his negotiations in public, sources disclosed that the allocation for public pay rises would fall between €250 million and €300 million in 2016.

It is also likely that any deal will be spread over two years.

Sources said they estimated the average pay rise would be in the region of more than €800 per head, and this would be largely tilted in favour of lower-paid workers.

Talks on pay restoration for 300,000 staff in the public service will get under way between Government representatives and unions next week.

The Government has insisted that all cuts to public service pay and pensions introduced since 2009 – which totalled about €2.2 billion – cannot be reversed in one go.

While the Haddington Road Agreement is not due to expire until summer 2016, moving on the issue sooner would be seen to be of political benefit to the Government parties before the next general election.

There have been tensions in Government about possible reforms which may be sought in exchange for pay restoration, with Minister for Health Leo Varadkar and Minister for Jobs, Enterprise and Innovation Richard Bruton calling for additional productivity. These were strongly rejected by public service unions.

The details of the pay proposal emerges as the issue is expected to dominate the annual conferences of some key unions this week. Unions representing nurses, health staff and lower paid and higher civil servants are all expected to call for pay restoration.