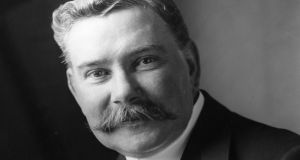 Louis Brennan is regarded as one of the most accomplished engineers and inventors Ireland has produced. He was born in Castlebar in 1852 to a hardware merchant, Thomas Brennan, and his wife Bridget.

Within a decade, the family moved to Australia. A young Louis Brennan displayed a penchant for invention and mechanics before beginning his career as a watchmaker.

He went on to take a position with a prestigious civil engineering firm. It was during this period – at the age of just 22 – that he designed the invention that would change his life: a steerable torpedo.

In the late 19th century, it represented a major evolution in weaponry. It was the first effective guided missile and had a top speed of 31mph. In 1878, Brennan received a patent for the Brennan Torpedo, the first of 38 patents he was to receive in his career.

The British government became interested in the design and offered Brennan and his chief engineer, John Ridley Temperley, a fee of £110,000 for the “exclusive rights” to the design in 1884.

The Brennan Torpedo became the centrepiece of British coastal defence for nearly 20 years.

It was agreed Brennan would oversee production of the torpedo, so he began work at an experimental manufacturing plant at Gillingham, Kent.

In 1892, he married Anna Mary Quinn – a childhood sweetheart from Castlebar – and they set up home in a large house called Woodlands near the Gillingham plant.

He remained there until 1896 . He spent years developing a monorail but it was ultimately deemed unsuitable for commercial use.

Brennan, then in his late 50s, was left bitterly disappointed, as well as broke. By the time of the first World War, he took up a position at the British ministry of munitions.

Just a month before his 80th birthday, Brennan was knocked down while on holiday in Switzerland, and died a few weeks later.