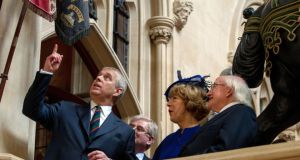 
The viewing by President Higgins of the colours of the Irish regiments of the British army disbanded in 1922 yesterday was another symbolic gesture designed to emphasise the shared history of the two countries.

In speeches during the first two days of his state visit to Britain the President has acknowledged the sacrifice made by Irish men who died while serving in the British army in the first World War.

At Windsor Castle yesterday Mr Higgins and his wife Sabina viewed the colours of five Irish regiments of the British army disbanded following the establishment of the Irish Free State in 1922.

The event, which lasted 30 minutes, was also attended by the Tánaiste and his wife.

The President and his wife were also accompanied by Prince Andrew, Duke of York, who is the second son of the queen and the Duke of Edinburgh.

The colours are on display at St George’s Hall in the castle where they were installed during a ceremony led by King George V in 1922 and they have remained there since.

All of those regiments suffered huge losses during the first World War. They were disbanded following the Anglo Irish Treaty of 1922 and the establishment of the institutions of the Free State.

A number of officers of the disbanded regiments played a key role in helping to train the Free State Army and were responsible for the successful prosecution of the Civil War by the government forces.