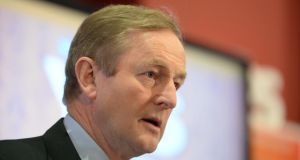 Taoiseach Enda Kenny: Rise in support for Fine Gael is encouraging for those in the party who want Kenny to call an early election. Photograph: Dara Mac Dónaill

The continued rise in support for Fine Gael revealed in the latest Irish Times/Ipsos MRBI poll will encourage those in the party who believe Taoiseach Enda Kenny should go to the country in November.

The detail of the poll figures is even more heartening for the main Government party than the top-line figures. The only cloud is that its Coalition partner has not benefited from the surge.

In regional terms the poll shows Fine Gael on 26 per cent in Dublin, which should put the party in a position to hold most of its seats in the capital. It is on 32 per cent in Munster and Connacht-Ulster but just 24 per cent in the rest of Leinster.

Fine Gael is easily the leading party among the best-off AB voters and middle class C1 voters. While support tails off in other social categories, it still wins a respectable 20 per cent among poorer voters.

It also gets a whopping 44 per cent share of the vote among the over-65s, who are a key demographic as they come out to vote in bigger numbers than any other age group.

One fascinating aspect of the poll is that among the 80 per cent of respondents who say they always or almost always vote, the Fine Gael share of the vote moves up to over 30 per cent.

The jump in the satisfaction rating of the Government from its low point last December to its highest point in almost four years is another positive for Fine Gael in the run-up to the election.

Labour, though, continues to have problems getting traction from the rise in satisfaction with the Government. It will need to do significantly better than its 7 per cent showing to have any chance of salvaging enough seats to get back into office.

In Dublin the party does a bit better, with 10 per cent of the vote, while it gets 7 per cent in the rest of Leinster and Munster and 6 per cent in Connacht-Ulster.

It will need to attract significantly more support in Dublin between now and the general election to have a realistic chance of holding on to many of the seats it won in the capital in 2011.

While support for Sinn Féin, at 21 per cent, is down since the last poll, it is still marginally ahead of Fianna Fáil both nationally and in Dublin. In class terms the party is strongest among the poorest voters although it has made some inroads into middle class areas.

While the party remains more attractive to men than women, the differential has narrowed considerably over the past few years.

The poll does point up a problem in extrapolating the precise level of support Sinn Féin is likely to enjoy in an election.

By contrast, Fianna Fáil is on 22 per cent among those who say they always vote. The poll shows some recovery in support for the party, with the vote in Dublin up to 15 per cent, which would put it in a position to challenge for a number of seats.

The party remains considerably stronger among the over-65s – who tend to vote in large numbers – than it is among younger age groups.

Support for Independents and smaller parties has dropped back by four points since the last poll, and at 24 per cent is now eight points lower than it was in December.

In Dublin the figure for Independents/Others remains a substantial 30 per cent. In age terms the over-65s are considerably less inclined to vote Independent than other cohorts.