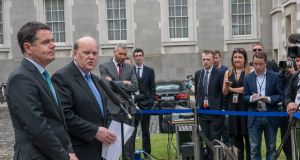 The drum beats from Brussels grew louder last week, as officials and ministers trailed back to the office after the holidays.

A final ruling in the three-year investigation by the European Commission into the Irish tax arrangements of Apple, the technology giant, was imminent.

The files had been ready for months. The commission’s competition division, manned by 800 full-time staff in Brussels, is the most powerful part of the EU, exercising quasi-judicial powers. They are the shock troops of the commission; while most EU legislation proposed by the commission goes to the European Council, representing member states, and in some cases the European Parliament for approval, competition decisions must be enforced. While typically the EU’s competition wing focuses on corporate merger and acquisitions, as well as state aid law, this is the first time the division has intervened to such an extent in a tax-related state-aid case.

The European Commissioner for Competition Margrethe Vestager was readying a fast-track 24-hour – rather than a two-week – notification procedure for the announcement. The Danish commissioner was going to war.

By last weekend, officials in Dublin were finalising briefing papers and facilitating a Sunday phone call between the Taoiseach and Apple boss Tim Cook. Each assured the other that they were on his side. Apple would fight the ruling, and so would the Irish Government. In fact, the Irish Government had been promising to fight the expected verdict for months.

But some people hadn’t been listening. On Sunday, Independent Alliance’s Minister for Sport Shane Ross rang Minister for Finance Michael Noonan to complain about the presentation of the Irish appeal as a fait accompli. There had been no Government decision to appeal – Ross knew that. The Cabinet would have to make a decision. And that meant the Independents had to agree.

Ross was further annoyed when Minister of State for Finance Eoghan Murphy went on the RTÉ Radio One’s This Week programme on Sunday and indicated that the Government believed the expected decision was wrong, and would appeal against it. A flurry of phone calls followed.

Fine Gael readily accepted Ross’s insistences that there could be no appeal without a formal Cabinet decision to do so. But they still went on telling everyone that there would be an appeal.

This was less an attempt to bounce the Independents into agreeing the appeal than it was a reflection of Fine Gael’s belief that nobody could seriously contemplate repudiating one of the pillars of Irish economic policy since the 1960s.

But some of the Independents didn’t see it like that. In fact, they don’t see the world like Fine Gael does – at all.

For the Independents, the presumption of the Fine Gael ministers also confirmed one of their persistent – and not entirely unfounded – beliefs: that the larger party does not take them seriously, does not treat them as equals and does not give them enough respect.

This was the fault line in Government that began to open like a chasm on Monday and Tuesday.

Noonan briefed the Independent ministers (he also briefed Fianna Fáil) on the impending decision from Brussels but they left with the impression that the Apple tax bill would be somewhere in the region of €7-€8 billion. Noonan gave them a thorough briefing, but he didn’t give them a number. When they heard the €13 billion figure the next morning, they were astounded. Moreover, they felt that Fine Gael hadn’t kept them in the loop.

Why didn’t Fine Gael brief them more comprehensively? Why were they left agog when the number came? Different Fine Gaelers have different answers. The most honest one is probably this: “Noonan doesn’t trust Ross.”

Vestager’s number, when it came, was breathtaking: €13 billion. Across Dublin, across the world, jaws dropped.

The Irish Government furiously rebutted the charge that it had given Apple a sweetheart deal. “Wrong”; “crazy”; “flawed”; “overreach”, ministers fulminated. Apple chief executive Tim Cook, in a statement, called the ruling “unprecedented” – accusing the commission of “effectively proposing to replace Irish tax laws with a view of what the commission thinks the law should have been”. Later, in an interview with RTÉ, Cook, called the ruling “maddening.” White House press secretary Josh Earnest said the Obama administration was concerned that the commission’s “unilateral approach” threatened to undermine collaborative efforts with the Europeans to make the international tax system fair for everyone.

US treasury secretary Jack Lew warned that the ruling could hurt the European economy and said that it undermined “the spirit of economic cooperation”.

Others were not so diplomatic in their choice of words. US Democratic senator Chuck Schumer, in line to be the next US senate majority leader if his party regains the upper house in the November 8th elections, called the ruling “a cheap money grab” by the commission.

All day Tuesday, Fine Gael ministers batted back the commission’s findings. With Apple and the US administration weighing in, the plan was that, by later in the week, the debate would have been framed as a row between the US and Europe, with Ireland unfairly stuck in the middle. It looked good on paper, but it failed to take into account the extent to which the political context would be changed by the enormity of the number – and the extent to which the Independents were prepared to dig their heels in.

By the time the Taoiseach was speaking to reporters on his way into the special Cabinet meeting on Wednesday morning, telling them a decision might not be reached that day, the opposition of the Independents was public. Noonan and Kenny met with them before the Cabinet meeting, but failed to convince them; Ross wanted to see the judgment, wanted to see tax briefing documents. The lack of trust wasn’t just one way.

Minister for Children Katherine Zappone, too, was feeling deeply uneasy about being bounced into a decision to appeal against the judgment. She didn’t buy the notion that the Government would suddenly have €13 billion to spend on the sort of social programme she has devoted her life to building, but nor was she comfortable to readily align herself with a tax-avoiding multinational. She wanted time to think about it, too.

The meeting itself was long and intense. Minister of State for Disability Issues Finian McGrath told them the Independents had been treated badly. We won’t put up with it, he told them. Noonan held up his hands. He shouldn’t have said the Government would appeal, he conceded, without their assent. But, now could they consider the case on its merits? The meeting was adjourned until Friday.

For all that it caught the Government on the hop, this train has been coming down the tracks for quite a while. On June 12, 2013, a letter arrived from the commission’s competition directorate – asking Dublin for details of a number of Apple subsidiary companies operating in Ireland.

The controversy had started, in earnest, a few months earlier. The US senate permanent sub-committee on investigations, chaired by senators John McCain and Carl Levin, had already caught the headlines investigating the international tax affairs of big US multinationals, including Microsoft. Government finances across the world were under pressure after the crash, and the tiny amounts paid by many multinationals on profits earned outside the US were increasingly controversial.

Apple was, however, their biggest target, and the committee had done its work. It showed the Apple’s effective tax rate on profits moved through Ireland was under 2 per cent for many years, and much lower in some years. This was enabled by moving large amounts of money into a company which was not tax resident anywhere and had made no tax return in five years. Levin dubbed it the “holy grail of tax avoidance”.

Mr Cook told the committee Apple had received a “tax incentive deal” to establish in Ireland, though he later denied it had received any special treatment. But the senators were putting together a story – Ireland had promised Apple it would pay hardly any tax in return for investment.

Brussels was wide awake and watching. Corporate tax avoidance is becoming one of the incendiary political issues of the age and while most governments are too cowed, feel too powerless, or just have other priorities to force the big corporates to pay more tax, the commission doesn’t feel that way. It has also long had a beef with Ireland’s corporation tax regime. Now the two issues were coming together.

A year after the 2013 letter, another communication landed in Dublin. The commission, it said, had taken a preliminary view that Ireland had offered Apple illegal state aid. More information was demanded. The letter warned that EU law “provides that all unlawful aid may be recovered from the recipient.”

In the wake of this preliminary ruling, investment bank JP Morgan did a sum. They looked at all Apple sales outside the Americas for over a decade and asked what would happen if Irish corporation tax was applied to this.

They come up with a sum of €19million. Add interest to €13 billion, and the JP Morgan figure isn’t looking too far off.

Privately, Fine Gael was furious with the Independents and horrified that they would play politics – as they saw it – with a vital, national interest. The blue side of the Government gritted its teeth and said, no problem, take your time. But also: don’t take too much time. You’ve got till Friday.

Contacts between Fine Gael and the Independents recommenced on Thursday, with both sides soon realising that their differences were not sufficiently large to collapse the Government. The Independents knew they would have to assent to the appeal; in fact, most of them think it’s probably the right thing to do. And they don’t want to collapse the Government.

For one thing, they are all seeking funding for initiatives and projects and policies in the budget. Not all of them are local, certainly – but some of them are. Noonan wasn’t slow to remind them of this.

Friday’s Cabinet meeting , when it came, was pretty perfunctory. The deal had largely been done the day before. Noonan came out fighting at the press conference with a pugnacious performance.

Behind the scenes, it wasn’t quite backslapping and bonhomie, but at least everyone seemed determined to learn lessons.

The events of the week have taken their toll. Ireland has experienced another wave of unfriendly headlines and, whether the Government likes it or not, the corporation tax regime in Dublin is now under ferocious scrutiny.

Whatever about “Ireland’s international reputation” (whatever that is), it has been a bad week for its increasingly shaky coalition Government.