He is second Irish agriculture commissioner after Ray Mac Sharry 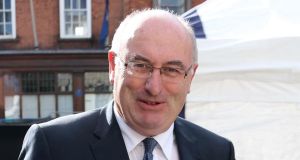 Phil Hogan who was named as the EU’s next agriculture commissioner today. Photograph: Collins

Phil Hogan has been named as the next EU Commissioner for Agriculture and Rural Development, marking the second time Ireland has secured the post following Ray Mac Sharry’s tenure in the early 1990s.

Among the most surprising announcements this morning was the election of Danish Commissioner Margrethe Vestager as Competition Commissioner.

Germany’s Guenther Oettinger, who is currently commissioner for energy, has been given the Digital Economy & Society portfolio, which will deal with regulation of the media and telecommunications sector.

Mr Hogan, who was in Brussels for the announcement, will now be interviewed by the European Parliament agriculture committee at the end of this month.

The European Parliament will then vote on the Commission at next month’s plenary session in Strasbourg, with the new Commissioners taking up their new roles by November 1st.

Mr Hogan will be responsible for the EU’s agriculture budget - which accounts for more than a third of EU spending - until 2019.

While the framework for the Common Agricultural Policy until 2020 was agreed last year, Mr Hogan faces a number of challenges in the new portfolio. These include ongoing EU-US trade deal discussions which have significant implications for agriculture and are facing increasing public scepticism across Europe, and Russian sanctions which are affecting EU agricultural exports.

Former French finance minister Pierre Moscovici has been appointed as the new EU economics and monetary affairs commissioner, despite reservations from Berlin.

The appointment of a French commissioner to the position is seen as a significant boost for France and Italy, who have been pushing for greater flexibility in the application of EU budget rules.

Britain has secured the financial services portfolio, in a move that will be seen as a significant coup for David Cameron given ongoing tensions between London and Brussels over the regulation of the financial sector.

Mr Juncker also unveiled a restructuring of the European Commission, announcing the creation of seven ‘vice presidents’ who will be responsible for a number of different directorates.

Mr Juncker denied there would be a creation of a “first-class and second class commissioner,” instead the new system would ensure a “dynamic interaction” between all commissioners.

Mr Juncker also restructured and merged some of the portfolios, for example replacing the European and Monetary affairs portfolio with Economic and Finanical Affairs, Taxation and Customs and merging the Environment portfolio with Marine and Fisheries. Energy and Climate Change have also been merged into one portfolio, with Spanish Commissioner Miguel Arias Canete securing the portfolio.

Among the appointees to the four vice-president positions are four former prime ministers, former premiers of Finland, Latvia, Estonia and Slovenia.

European Commissioners are elected for a five-year term, and command a basic salary before tax of €250,000 a year plus allowances.