An Taoiseach Leo Varadkar has accused Sinn Féin leader Mary Lou McDonald of "hypocrisy" after she attended a €400 a plate fundraiser in New York while other party leaders partook in Armistice Day commemorations. Video: Oireachtas TV 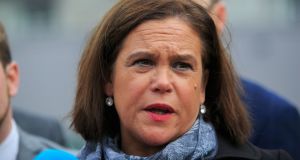 Sinn Féin president Mary Lou McDonald said the Taoiseach and the Tánaiste should not be ‘harbingers of doom’. Photograph: Gareth Chaney Collins

The real action in the chamber happened before the official proceedings began.

And people were still talking about it long after Leaders’ Questions was finished and the Dáil had moved on to other things.

Of course it involved Mary Lou McDonald, because the Sinn Féin leader was prominent in much of what went on in and around Leinster House on Tuesday. When she accused the Taoiseach of publicly promising tax cuts for workers while simultaneously doing away with minor tax relief for low-paid workers, Leo Varadkar responded by launching a stinging attack on her for missing the recent Armistice ceremonies and inauguration of President Higgins so she could quaff champagne and “hobnob with the super-rich” at a $400-a-plate party fundraiser in Manhattan.

Mary Lou, on this occasion, decided not to take the bait and reiterated her line that Leo Varadkar is more interested in helping out the rich while “ordinary workers to fall to the bottom of the pile yet again”. Perhaps she had her imminent meeting with Máiría Cahill on her mind.

Or perhaps she was still discommoded by what happened a while earlier, when she found a former cabinet minister sitting in her usual berth when she arrived for a group photograph with serving and former women TDs and senators to mark 100 years of women’s suffrage.

After the event, the ex-minister – Fianna Fáil’s Mary Hanafin – said the Sinn Féin leader “bullied” her out of the seat.

I went in to the meeting with low or no expectations and I came out of it, if it’s possible, with even lower ones

Later in the evening, Mary Lou met the former senator who claims she was raped by an IRA man and then had to endure Sinn Féin questioning her integrity and covering up what happened to her after she went public with her story.

McDonald recently issued an apology to Cahill for the party’s poor handling of her complaints, citing its inadequate procedures around the mandatory reporting of abuse allegations.

Cahill rejected that apology as “woefully inadequate”, claiming McDonald didn’t say the party believed her and didn’t address how her situation had been handled nor acknowledge that the Provisional IRA had investigated the abuse.

The two women met in what Sinn Féin later called “a candid and lengthy meeting”.

“I went in to the meeting with low or no expectations and I came out of it, if it’s possible, with even lower ones,” said the former Labour senator afterwards. In a subsequent tweet, she accused McDonald of “an abdication of responsibility, bluster and spin, or what I described to her as ‘bullshit’”.

Earlier in the day, a much more pleasant event awaited Mary Lou, who was one of a large contingent of current and former Oireachtas members gathered in the Dáil chamber for a group photograph to commemorate the centenary of women being able to vote and stand for election to parliament for the first time.

It was a happy occasion, with many blasts from the political past lining out for this special portrait of a unique band of Irish women. Seating was allocated in the front row for serving and former cabinet ministers, with the overflow joining ministers of state in the next two rows.

Former president of Ireland and former senator Mary Robinson was also allocated a seat in the front, along with dedicated seating for members of the organising committee from the Irish Women’s Parliamentary Caucus.

Just in the nick of time, with everyone in place and the photograph about to be taken, Mary Lou rushed into the chamber. She headed for the central stairs and her usual berth, the one she inhabits as party leader when the Dáil is in session and where Gerry Adams sat before her.

Mary Lou is an accomplished woman with many achievements to her name, but having served as a government minister is not one of them.

As the rest of the women watched with growing interest, she arrived at her seat to find Mary Hanafin, the first female government chief whip – who held a number of senior ministries including Social and Family Affairs and Education, sitting in her spot.

“Who gave you permission to sit there?” asked Mary Lou, very put out, telling Mary H that this was her seat and she wanted to sit in it.

Former tánaiste and Fianna Fáil minister Mary Coughlan was sitting to Hanafin’s left while Mary Robinson was to her right, across the aisle.

Hanafin pointed out that she had been directed to her seat by the ushers, in accordance with the arrangements in place for the event. Former ministers were instructed to sit in the front row. She reminded the Sinn Féin leader it wasn’t a normal Dáil sitting and the usual seating plan was not in operation.

An usher approached Hanafin and asked apologetically if, maybe, she might facilitate deputy McDonald

Mary Lou replied she didn’t really care where anyone else was sitting but this was her seat and she wouldn’t be sitting for any photograph until she got it back.

As the stand-off continued, Mary H declared she was where the ushers put her and perhaps Mary Lou should check with them. Which she did, marching over to the chief usher and informing him that an interloper was sitting in her place. (It didn’t seem to bother anyone else. Serving TDs just sat where they found a vacant spot.)

An usher approached Hanafin and asked apologetically if, maybe, she might facilitate deputy McDonald who was refusing to sit anywhere else. So the former cabinet minister vacated her prime ministerial spot (front and centre) and looked for a seat elsewhere. She finally found a welcome off to the side next to former Fine Gael education minister Gemma Hussey.

After the photograph was taken, the 90 or so women – including former senator and Supreme Court judge Catherine McGuinness, former tánaiste Joan Burton, and former ministers Nora Owen, Síle De Valera, Niamh Breathnach and Jan O’Sullivan – repaired to the Oireachtas restaurant for lunch.

The Hanafin/McDonald incident was the talk of the place.

“I did the gracious thing and moved when the usher asked me. I didn’t want to make a scene or make the situation any more difficult for the staff,” said Hanafin afterwards, who described McDonald’s actions as “bullying, pure and simple”.

She said some of the women told her she should have stayed put and were very surprised that she, of all women, moved at the behest of the Sinn Féin leader. And others told her she was right to move because it would have put the usher in an awkward position.

One retired Dáil veteran said she was astonished by the scene. “Nobody has a permanent seat in the House. You are only sitting in there for as long as the voters decide to keep you there. It’s not yours for life. We all learn that in the end.”