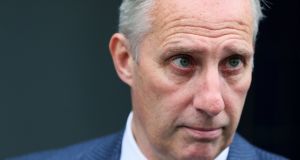 Ian Paisley jnr is facing fresh calls to resign amid claims the DUP MP failed to declare another luxury holiday to parliamentary authorities.

In July, the North Antrim MP was suspended from Westminster for 30 sitting days after he failed to declare holidays to Sri Lanka in 2013 and subsequently lobbied the then prime minister David Cameron not to support a UN resolution criticising human rights abuses in the country.

The BBC Spotlight programme reported on Tuesday that Mr Paisley had not registered a complimentary family holiday at a resort in the Maldives in 2016 after advocating on behalf of its government.

Mr Paisley has said he paid for part of the trips and the rest was paid for by a friend whose identity he has chosen not to reveal.

In a statement, Mr Paisley said he was “satisfied the vacation did not have to be recorded on the register” of MPs interests.

“It really is time for Ian Paisley to resign,” Mr Eastwood said. “If he doesn’t then the onus is on Arlene Foster to remove him from the DUP.”