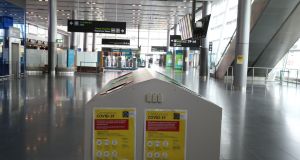 Gardaí or the Border Management Unit could check in with those who have arrived into the State to ensure they are complying with the isolation measures. Photograph: Stephen Collins/Collins Photos

Travellers will be legally obliged to tell the State where they plan to self-isolate after arriving into the country by plane or boat under new plans to tackle the spread of coronavirus.

The Cabinet is expected to consider plans which would see passengers legally required to fill out a locator form. Gardaí or the Border Management Unit could check in with those who have arrived into the State to ensure they are complying with the isolation measures.

Minister for Health Simon Harris said that “at the moment the passenger locator form is on an administrative basis. A person is asked to fill it out. I believe it should be on a legal footing”.

He said that conversations are ongoing with ministerial counterparts in Northern Ireland and the UK about the potential measures.

“Certainly, on a north, south, east and west basis this is a matter I have discussed with my counterpart in Northern Ireland and I know the Taoiseach has spoken publicly about his discussions with the British prime minister.

“At a European level, there is no doubt this is discussed at various ministerial European Union councils and the like.

“We must acknowledge that different countries are in very different places. For example, I know Germany is considering the idea of having a travel bubble with a couple of other countries that are in a similar position with the virus.”

He said the Irish position is that “we expect people, whether Irish or not, to self-isolate for 14 days. This applies to anybody coming to the country, including returning Irish people. We also expect people to fill out a passenger locator form, indicating a name, phone number and where the person intends to stay for those 14 days”.

Mr Harris said that these processes are being administrated by the Border Management Unit. “We must look at how to regulate for that,” he said.

It comes after public health officials suggested to the Government earlier this month that people travelling into the State should be required to self-isolate for 14 days at a “designated facility”.

In a letter to Mr Harris, chief medical officer Tony Holohan recommended that “whole of government work” be undertaken “to allow for government decision on the introduction of a range of more stringent requirements relating to travel from overseas”.

Mr Harris indicated last week that it is his personal view that self isolating for 14 days be made mandatory for those travelling into the country.