Pensioner: ‘I would be in horror if Sinn Fein was in charge of finance’

Meet the Voters: ‘Lucinda Creighton had the best delivery. She surprised me’ 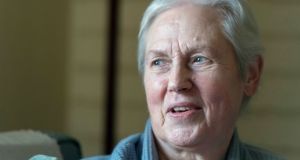 Catherine O’Brien is a pensioner frustrated by cuts to the pension and wants to see the Eighth repealed. Read Catherine’s full profile here

We watched the debate on Monday on RTÉ but I think everybody’s rather weary of hearing the same old arguments and point scoring - Fine Gael and Labour blaming Fianna Fail for the mess .

Joan and Micheal getting stuck into each other with interruptions from Adams.

We’ve heard it all before at this stage and what we really need to hear is how people will change things and some easing of hardship for people who are suffering - we need the politicians to put some structure on their ideas because people need hope after so many years of austerity.

I thought Lucinda Creighton had the best delivery of the night. She surprised me because I didn’t know much about her but I thought her point about changing the political culture and getting rid of cronyism would be a great advantage to Irish politics.

“We need to solve the problem of the HSE because it’s grown into a monster with so many layers of administration and no one taking responsibility for anything, just passing it on to the next layer so I thought she was the best of them really- the only one with any fresh insights.

“Gerry Adams was the joker in the pack - I would be in the horror if Sinn Fein was in charge of the country’s finances. I wonder about all the money they’ve got in their coffers from America - that would go some way towards solving our problems if they were feeling generous.

I think Gerry Adams is too steeped in 1916 and seems to perpetuate the past all the time.

At this stage it’s a fact of history and we are now living in the present. He needs to fast forward 100 years to be any of any consequence but I still wouldn’t trust him.

We haven’t met any candidates calling to our house but somebody dropped in pamphlets for Billy Kelleher of Fianna Fáil and Julie O’Leary of Fine Gael.

We met both of them at a hustings debate in the Imperial Hotel organised by Age Action Ireland.

Julie is just dipping her toes in the water - she had a lot to learn even though she was receptive to what we had to say about primary care but she said the chances of getting the main parties to work together were slim or non-existent.

I thought Lorna Bogue of the Green Party, who is running in Cork South Central, spoke with feeling and she has experience of the health situation.

She would be good but perhaps she is too honest and she will be sat on.

Catherine O’Brien was in conversation with Barry Roche as part of The Irish Times Meet the Voters series, profiling 10 sample voters in a bid to track the impact of the 2016 General Election campaign on their voting intentions. Follow them at irishtimes.com/election-2016/meet-the-voters