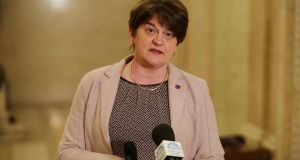 Northern Ireland’s first minister, Arlene Foster: the legislation is a “massive and welcome step forward for the innocent victims” of the Troubles. Photograph: Jonathan Porter

New legislation which establishes a payment scheme for victims of the Troubles will block anyone injured while committing a crime from benefiting.

Publishing details of the scheme, Northern Ireland secretary of state Julian Smith said the time had come “to implement a victims payments scheme to deliver for those who need it most and for those injured through no fault of their own.

“I would like to pay tribute to the courage of those people who have fought long and hard to see such a scheme,” he said. “We have talked about this for long enough. It is time to get it done.”

Payments will range from £2,000 to £10,000 per year, depending on the severity of the injury, and will cover injuries sustained between 1966 and 2010. They can also be transferred to spouses or carers.

The scheme is expected to open for applications by the end of May. Payments will be backdated to 2014, when the Stormont House Agreement initially proposed a Troubles pension scheme.

Anyone who was injured in an act they were convicted of involvement in will not be eligible for the payment.

The legislation diverges from the definition of a victim contained in the Victims and Survivors Order, which regards a victim or survivor as someone who was “physically or psychologically injured as a result of or in consequence of a conflict-related incident” and does not refer to an individual’s culpability.

A judge will chair a committee which will decide on the more complex cases.

Sinn Féin has accused the British government of acting in “bad faith” and attempting to create a “hierarchy of victims”.

“The British government seems once again to be more intent on imposing its narrative of the conflict on people who deserve this pension,” said Linda Dillon MLA. “This partisan approach to dealing with the legacy of the conflict is unacceptable.”

Sinn Féin has written to Mr Smith asking for an urgent meeting.

Northern Ireland’s first minister, Arlene Foster, said the legislation was a “massive and welcome step forward for the innocent victims” of the Troubles.

“It is particularly welcome that this pension will only be for those who were injured through no fault of their own,” the DUP leader said. “It was immoral that the 2006 order categorised innocent victims alongside the perpetrators of acts of terror.

“This pension will be awarded to people of all faiths and none but it will not be awarded to victim-makers. That will be welcomed by many across all communities.”

Kenny Donaldson, of victims’ group Innocent Victims United, said he had concerns “that those victims and survivors who are not UK citizens but who were impacted by the Northern Ireland troubles, particularly Irish citizens impacted by events perpetrated in the Republic of Ireland, will be excluded”.

The Belfast-based Wave Trauma Centre, which works with victims of the Troubles, welcomed the scheme, but said it wanted to look closely at the detail.

“The injured group at Wave have been campaigning for over 10 years for official recognition and acknowledgment of the great harm done to individuals who have been severely injured during the Troubles,” said chief executive Sandra Peake.

“To see legislation being enacted at Westminster is testament to the tenacity and resilience of the group who have been fighting an often lonely campaign on behalf of those who have been marginalised for too long.”

Andrée Murphy, from victims’ group Relatives for Justice, told the BBC it would be progress to “at last see some sort of recognition” but that there were “significant” gaps.

“This should be a really good day, there has been a very long hard campaign by the most vulnerable people who are affected by our conflict,” said Ms Murphy.

However, she said, “We knew there was going to be legislation that said those who sustained their injury by their own hand would not be eligible, but this seems to go far further than that.”