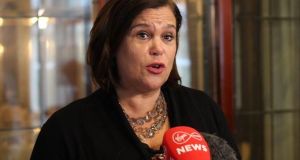 Sinn Féin president Mary Lou McDonald: Asked if the IRA still exists, even as a political organisation, she said: ‘No, it does not, so far as I am aware, no, it does not.’ Handout photograph: Sinn Féin/PA Wire

Opposition parties will continue to engage with Sinn Féin despite the Garda Commissioner Drew Harris’s statement that he agreed with the PSNI’s assessment that the IRA’s so-called army council continues to oversee Mary Lou McDonald’s party.

Green Party, Social Democrats and People Before Profit representatives all said they would continue to talk to Sinn Féin as the various parties seek to explore options for government.

Green leader Eamon Ryan said his party “accepts and treats with seriousness the advice of the Garda Commissioner on these matters”. However, he said that he would continue to speak to Sinn Féin about government formation.

“We do so on the understanding that such engagement in the democratic process is the best way of protecting the rights for all our people, as set out in Bunreacht na hÉireann,” Mr Ryan said.

A spokeswoman for the Social Democrats indicated the party would also continue its contacts with Sinn Féin. “Our key focus is on exploring what options are possible for a left-led government of change,” she said.

Mr Harris’s comments on Friday caused a political storm the day after the Dáil failed to elect a new taoiseach, although Ms McDonald won the largest number of votes for the post on Thursday night.

At a Garda passing-out ceremony in Templemore, Co Tipperary, Mr Harris confirmed the Garda’s view of the relationship between the Provisional Army Council, the IRA and Sinn Féin was the same as that of the PSNI.

“I am aware of the PSNI and British security service’s assessment and we do not differ from that view,” said Mr Harris.

A 2015 report commissioned by the British government on the status of Irish paramilitary groups, written by the PSNI and MI5, said the Provisional Army Council – the highest authority in the IRA – still existed, as did the Provisional IRA itself, though it was in a smaller form and was committed to the peace process.

The report stated the Provisional Army Council still strategically oversaw both the IRA and Sinn Féin. The PSNI has said its analysis had not changed in the five-year period since the report was drawn up.

No matter how hard Sinn Féin representatives try to spin in the media, the inconvenient truth keeps popping up

Taoiseach Leo Varadkar called on Ms McDonald to publicly state if her party has cut links with the IRA’s Provisional Army Council.

Fianna Fáil leader Micheál Martin said the issue of whether or not the IRA Provisional Army Council still oversaw Sinn Féin was not going to go away.

“No matter how hard Sinn Féin representatives try to spin in the media, and no matter how aggressively their trolls try to bully critics on social media, the inconvenient truth keeps popping up,” he tweeted.

But, asked if the IRA still exists, even as a political organisation, Ms McDonald said: “No, it does not, so far as I am aware, no, it does not.”

Speaking in Dundalk, she said: “I don’t answer for the IRA, I’m not a spokesperson for the IRA.

“I’m the leader of Sinn Féin and I’m telling you the war is over,” she said.

Talks on possible government formation will continue between the parties next week, but there is no sign of any breakthrough.