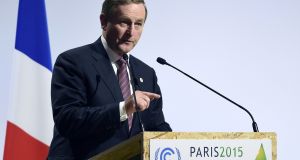 Irish involvement with the climate change talks in Paris did not get off to a very auspicious start 10 days ago when Taoiseach Enda Kenny made a special case for Irish agriculture.

His unprompted defence of Ireland’s biggest emitting sector caused a flurry of consternation at home.

Environmentalists accused the Government of seeking a free pass for agriculture, and the Opposition accused him of hypocrisy, saying one thing to a world audience and something different to a domestic audience.

Others wondered why he brought it up at all given that Irish agriculture emissions do not even enter the equation at COP21. Ireland is a part of the EU block and is rowing in fully with it key pledge of a 40 per cent cut in emissions by 2030.

In general, Ireland’s position tallies with that of the larger union on all the big issues (ambition, transparency, finance), and as such would be regarded as comparatively progressive.

Ireland has been represented at the talks by a small number of officials from the Department of the Environment with expertise on climate.

There is also a senior official from the Department of Agriculture and an experienced environmental lawyer from the Attorney-General’s office at the summit.

He was initially involved with his counterpart ministers from Austria and Romania in working on actions that needed to be taken before 2020.

He was later involved in talks on emissions trading between the EU and Brazil, which was due to be put to plenary.

Besides the Government, there are representatives of many Irish environmental and aid agencies, including Concern, Trócaire, Christian Aid, Friends of the Earth, and Greenpeace. All have been critical of a lack of ambition, and have said the EU should have done more.

There are a number of other politicians who have attended or are attending COP21.

Coronavirus: Cabinet considers scrapping 20km limit and allowing some pubs to reopen 10:05
Sinn Féin TD confirms he broke travel limit to attend funeral 10:00
‘Up to 40%’ of close contacts of meat plant workers with Covid not traced 09:21
Gerry Adams asks Irish-Americans to lobby for unity referendum 09:06
More than 200 Syrians cleared to travel to Ireland once restrictions lifted 07:53