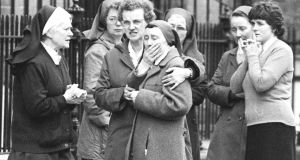 Members of the Loreto order outside the convent on St Stephen’s Green as the bodies of the fire victims were being removed. Photograph: Tom Lawlor

The OPW considered suing the Loreto Order after a fire killed six nuns at a convent in Dublin city centre.

On June 2nd, 1986,a fire broke out at the rear of the Loreto Convent on St Stephen’s Green. Six elderly nuns died. Contemporaneous reports described them as “very saintly women, very prayerful” and “great characters”.

Documents from the State papers show the OPW considered seeking compensation from the order for damage done to their building next door.

The convent and secondary school, in Georgian buildings at numbers 53, 54 and 55 on the square dated from the mid-1700s. The fire began in an extension built in 1908, and newspapers reported a modern building, to the rear of number 52, which housed the ombudsman’s office and accommodation for the Office of Public Works, was also damaged.

A document, dated June 10th 1986, in a file from the attorney general’s office, said the precise cause of the “unfortunate fire” had not been determined, so the issue of negligence could not be excluded.

“Pending the results of enquiries presently being conducted by the Garda Technical Bureau, I favour the issue of a short letter to the Revd Mother Superior, putting her on notice of the board’s intention to hold her, as occupier, liable to compensate the OPW for the loss and damage suffered by them in their adjoining premises,” the note said.

A typed note below from an official at the attorney general’s office agreed the letter should be sent along the lines suggested.

“Apart from this, efforts should be made to obtain such evidence as may be available to establish whether there was negligence in this case,” the note said.

There was no record on file about whether the Loreto order was pursued for damages by the OPW.

The cause of the blaze did emerge at the inquest into the death of the nuns, held in Dublin on November 14th. Detective Garda Patrick Byrne, of the Garda Forensic Bureau, gave evidence and said the fire had started near a storeroom at the rear of the first-floor physics laboratory. The probable cause was an electrical fault, he said.

After the blaze, Loreto Convent and College moved temporarily to Harcourt Street, but re-opened on St Stephen’s Green in 1988.