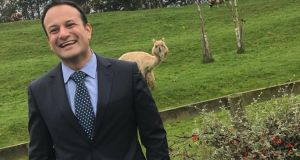 The Taoiseach recently tweeted a photograph of himself being “photobombed by a llama”. Photograph: Twitter

Sinn Féin TD Caoimhghín Ó Caoláin has suggested the Taoiseach’s tweeting has made him “more Trump than Trudeau’’.

He said Leo Varadkar had recently tweeted a picture of those present at a meeting of a Cabinet security committee.

“Surely this is unprecedented and an unwise thing to do in the circumstances,’’ Mr O Caoláin added.

“Certainly it suggests to me, with all respect, the Taoiseach is more Trump than Trudeau.’’

Mr Varadkar told the Dáil membership of the national security committee was separate to the Cabinet committee F which was the subject of his tweet.

The Cabinet committee involved politicians while the national security committee did not, he added.

He said the membership of Cabinet committee F was public knowledge and certainly not a national security issue.

RTÉ cameras had been present for its first meeting, which garnered no comment, although a tweet did.

“It really does demonstrate the terror some people have of modern communications,’’ he added.

Some people could not cope with it and even thought it was a threat to national security.

“Never have I seen a criticism scrape the bottom of the barrel more so than such nonsensical criticism,’’ the Taoiseach added.